To stimulate production of cellular energy 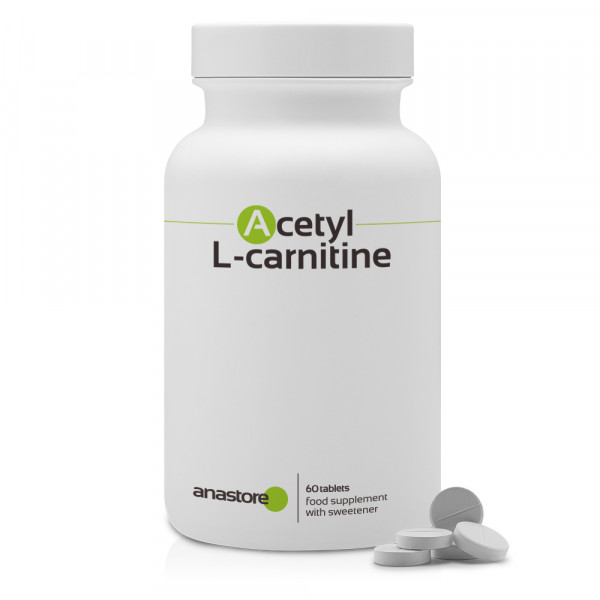 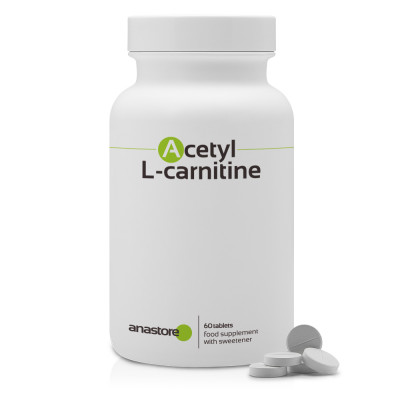 Acetyl L - carnitine supplies the cells with carnitine, a fuel they need to function.

Certain cells in an organism, such as those in the muscles or the heart or again the cells in the nervous system, and thus in the brain, are known to have energy requirements that are more important than elsewhere.

Naturally produced by our organism (liver, kidneys), Acetyl L - Carnitine is synthesized by the body from lysine and cysteine. Its spontaneous production is often compromised as it requires iron intervention and several vitamins (C, B5, B6, B8 and B9).

Acetyl-l-carnitine is a powerful anti-ageing product. By helping transport fatty acids to the mitochondria, which are like cellular power plants, it optimises their metabolism into energy and muscle. But its anti-ageing effects are most remarkable when it is combined with alpha lipoic acid and coenzyme Q10. Acetyl-L-carnitine boosts the action of these compounds in maintaining the functions of the mitochondria, increasing energy production in every cell of the body.

Acetyl L - Carnitine reacts to cerebral functions in several ways. The most obvious effects are an increase in alertness, concentration, reflex response and visual coordination. ALC also controls symptoms of depression as well as aging symptoms (emotional state, memory loss, decreased alertness, etc.). The results of Acetyl L - Carnitine use are only visible after two months. This is, without a doubt, one of the most efficient nutrients for helping to decelerate (slow down) cerebral aging. Using Acetyl L - Carnitine is also excellent for reducing age spots.

The protective action of acetyl-L-carnitine has particular benefits for the brain. Ageing causes alterations in the metabolism of brain cells, but acetyl-L-carnitine helps to avoid many of these degenerative mechanisms. The most noticeable effects are improved attention, concentration, reflexes and visual coordination. Acetyl-L-carnitine also relieves the symptoms of depression, while also reducing the effects of ageing, such as negative emotional state, memory loss and reduced attention span. The benefits of taking acetyl-L-carnitine are visible in just a few months.

It has also been shown that nerve pain in diabetes is closely linked to acetyl-L-carnitine deficiency. It appears that a specific enzyme limits the availability of gamma-linolenic acid in diabetes sufferers, as well as the synthesis of nitric oxide and L-carnitine in the cells lining the brain’s capillaries. This is why patients with diabetes often develop nerve pain. However, taking acetyl-L-carnitine supplements maintains nerve impulse conduction at near normal rates without any side effects on glucose, insulin or fatty acids levels.

Acetyl-L-carnitine is also extremely useful in case of cataracts. Glycation, or glycosylation, is the phenomenon where glucose bonds with proteins, producing non-functional compounds in the body. This phenomenon is especially noticeable in the crystalline lens (cataracts), brain (senility) and collagen of the skin (wrinkles). Acetyl-L-carnitine reduces crystallin glycation by around 40% (but not L-carnitine, which has no effect) and the formation of advanced glycation end products, or ‘AGEs’, by around 70%. This is highly significant, since these are the AGEs that make cataracts irreversible.

Finally, acetyl L - carnitine, like all carnitines, increases fertility. It can also rectify certain affections such as asthenospermia, an affection that reduces the mobility of the sperm.

2 tablets per day to chew or suck.

Excessive consumption may produce laxative effects. Not recommended for pregnant or lactating women. Do not exceed the recommended daily dose.

To develop and tone the muscles