Standardised to contain 65% in boswellic acid 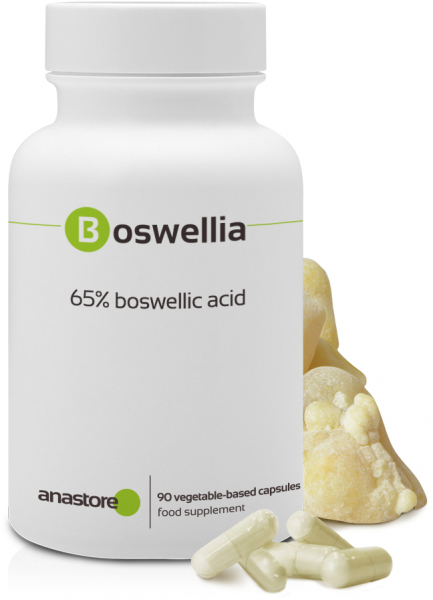 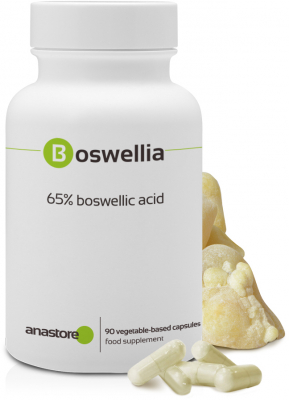 Boswellia serrata is a tree originally found in India highly valued on account of the resin extruded from its trunk when it is cut open. This resin is very popular in Ayurvedic medicine in which it has traditionally been used. It has also been used to produce incense.

This precious resin contains a high percentage of boswellic acids, pentacyclic triterpenic acids with great anti-inflammatory power the effectiveness of which is attested to by various scientific studies. Boswellic acids act by inhibiting various pro-inflammatory molecules such as the enzyme 5-lipoxygenase, cyclooxygenase and the complement system.

Our concentrated extract of Boswellia serrata gum resin standardised to contain 65% in boswellic acids and is recommended as an anti-inflammatory agent, a painkiller, for allergies and for helping to reduce the inflammation associated with conditions such as rheumatoid arthritis, psoriasis, erythematous eczema, asthma and inflammatory illnesses of the intestines.

Thanks to its high concentration of boswellic acids the product is highly effective.

The Boswellia (Boswellia serrata) is a tree of the Burseraceae family native to India. It grows in mountainous regions of India, North Africa and the Middle East. Its trunk, on being cut open, exudes a resin known as “Salai guggul” or “Indian Olibanum” which is used in Ayurveda to relieve pain1. This resin is collected in summer and autumn and is stored in bamboo baskets to eliminate acid and leave the resin to solidify. Once processed the gum-resin is classified according to smell, colour, form and size2.

The Boswellia serrata is one of the most valuable plants of Ayurveda. Used for thousands of years its name in Sanskrit (“Gajabhakshya”) refers to the fact that elephants, animals renowned for their longevity and strength, were seen to consume this plant.
The gum obtained from the incision in the trunk has a pleasant smell and a slightly bitter taste and has been used as incense (“frankincense”) by the Romans, Greeks and Egyptians2.
It has traditionally been used in case of arthritis, injuries and strengthening the female hormone system3.

The gum resin of the Boswellia serrata contains 30-60% resin and 5-10% essential oils with the rest being polysaccharides (~65% arabinose, galactose, xylose). The resinous part contains mono-, di- and triterpenes, pentacyclic triterpenic acids (boswellic acids) and tetracyclic triterpenic acids2. It has a pleasant smell thanks to its essential oil content and the boswellic acids are responsible for its anti-inflammatory properties. The acid acetyl-11-keto-beta-BA (AKBA) is one of the most effective boswellic acids and is a powerful inhibitor of the enzyme 5-lipoxygenase, an enzyme involved in inflammatory processes4, 5.

The gum-resin of Boswellia serrata has various properties: it has an anti-inflammatory effect, regulates the levels of lipids in the blood, is a painkiller, acts as a hepatoprotector, and is anti-arthritic and anti-arteriosclerosis2. In Ayurveda boswellia is seen as having diaphoresic properties (used to increase sweating), diuretic properties and is an emmenagogue (used to stimulate menstruation)6.

Boswellic acids have anti-inflammatory properties7. These acids also act on other pro-inflammatory molecules such as cyclooxygenase and the complement system5. They inhibit the nuclear factor Kappa-B (NF-KB), a transcription factor involved in the inflammation response and also inhibit human leukocyte elastase, a protease (enzyme which degrades peptide bonds of other proteins) released by inflammation and hypersensibility7. It also has anti-allergic properties associated with the inhibition of the degranulation of mast cells, cells involved in allergic reactions8.

Finally an analgesic effect has also been observed, with a study of healthy persons showing an increase in the pain threshold and of pain tolerance after the ingestion of extract of B. serrata5.

Not recommended for pregnant or lactating woman. Do not exceed the recommended daily dose.