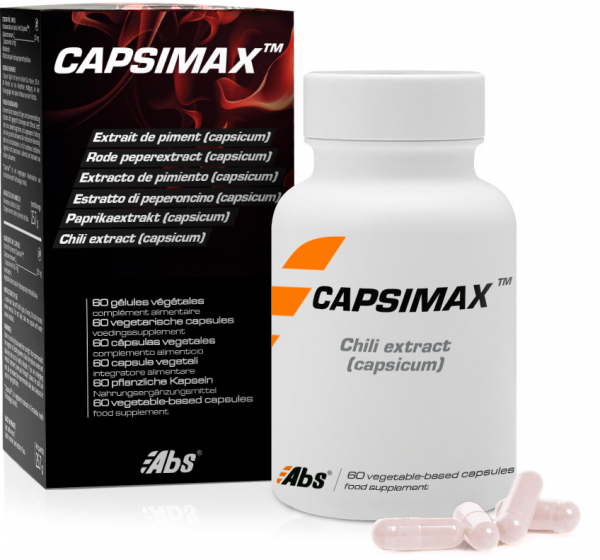 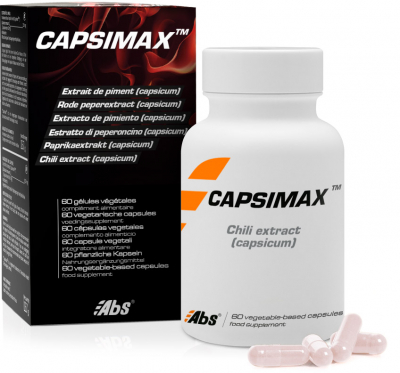 **Capsimax™ is a registered trademark of OmniActive Health Technologies Limited.

CAPSIMAX is a patented composition of capsicum extract.

It has been clinically proven by a study carried out at the University of Oklahoma in the United States that taking Capsimax before exercise helps to raise the metabolism before, during and after exertion. Helping to burn off no less than 278 extra calories!

Stimulates the ‘digestion’ of carbohyrdates (sugars) in runners at rest and during exercise; boosts the oxidation of fats and burning of lipids needed for weight loss and reduces calorie intake.

Taking Capsimax helps to burn off 12 times more calories for upto one hour after exercise.

The hot chilli pepper, a red pepper found mainly in South America, contains capsaicin (the compound responsible for its hot taste!), whose effect on weight loss has been demonstrated in numerous studies.

However, in order to be effective, around 10 g of hot chilli pepper must be consumed daily over a period of weeks, which is not practical: capsicum extract is much too acidic for the stomach!

What's more, it's difficult to imagine being able to swallow pure hot pepper at breakfast! Or even to encapsulate this extract into a matrix inert enough to be able to be tolerated by the intestines and by the stomach.
This component offers many benefits: scientific studies have shown that, taken in 30 mg daily doses, capsicum extract improves thermogenesis, increases energy expenditure and promotes weight loss in both men1 and women2.

It stimulates the ‘digestion’ of carbohydrates (sugars) in runners at rest and during exercise3, increases the oxidation of fats3 and the burning of lipids needed for weight loss4 and regulates calorie intake5.

It also has an antioxidant effect on red blood cells and on liver cells6, reduces oxidative stress (studies carried out on animals)7. It also promotes hair growth: a test on alopecia sufferers found that, taken daily, 6 mg of capsaicin combined with 75 mg of isoflavone was an effective treatment8.

One capsule of Capsimax corresponds to 315 mg of highly concentrated capsicum extract. It has been clinically proven by a study carried out on 25 subjects at the University of Oklahoma in the United States that taking Capsimax before exercise helps to raise the metabolism before, during and after exertion. Helping to burn off no less than 278 extra calories!

A real boost to your slimming regime, equivalent to:

(Conversely, daily consumption of an extra 278 calories per day can lead to a weight gain of over 25 pounds (12.5 kg) per year.). In other words, taking Taking Capsimax helps to burn off 12 times more calories for upto one hour after exercise.

1 capsule per day with half a glass of water, 30 to 60 minutes before exercise. On rest days, take one capsule with water before breakfast.

This product can cause intestinal discomfort in some people. Not recommended for pregnant or lactating women. Do not exceed the recommended daily dose.

The quality of this product won it the 2009 Scientific Excellence Award for best nutritional supplement.