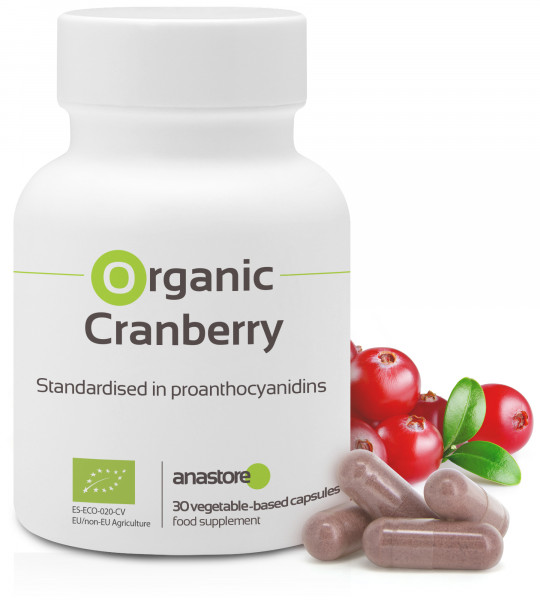 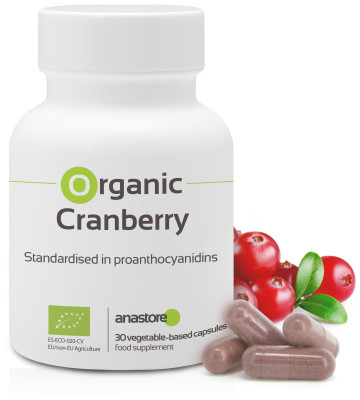 Cranberry is rich in proanthocyanidins (anti-oxidant and anti-bacterial), avoiding the appearance and recurrence of cystitis (urinary infections) by stopping bacteria attaching to the walls of the bladder and reproducing.

Due to these antioxidant effects, cranberry juice helps to fight against urinary tract infections in both men and women, as well as their recurrence.

The cranberry is a small red fruit similar to the bilberry, and was a staple food source of the American Indians.

A recent review of its compositions has clarified the mechanisms of its well-established beneficial properties regarding urinary tract infections.

In fact, the cranberry contains proanthocyanidins, a very specific category of flavonoids (polyphenols), the anti-oxidant substances to be found in all plants.

These proanthocyanidins (also known as “condensed tannins”), which are also found to a lesser extent in tea and chocolate, are substances that, like all polyphenols, have anti-oxidant effects on the body’s cells (see “free radicals” leaflet).

Proanthocyanidins also have an anti-microbial action: in fact, they can bind with certain bacteria and so "trap" the bacteria that often cause urinary infections (Escherichia coli).

With unpleasant symptoms such as the frequent need to urinate and a burning sensation during urination, urinary infection, also known as cystitis, is in fact caused by an abnormal proliferation of the bacteria inside the bladder. It is common among women and men, although it is often associated with prostate problems among the latter.

All studies show that the regular intake of cranberry juice, and therefore proanthocyanidins, helps to fight against urinary tract infections and their recurrence.

Recent studies suggest a similar effect on other bacteria. This is likely to increase the use of proanthocyanidins in case of certain ulcers (caused by the Heliobacter pylori bacteria), dental cavities or certain gingivitis (caused by the Streptococcus mutans bacteria).

For benign hypertrophy of the prostate