Standardised to contain 95% in proanthocyanidins and 50% in resveratrol 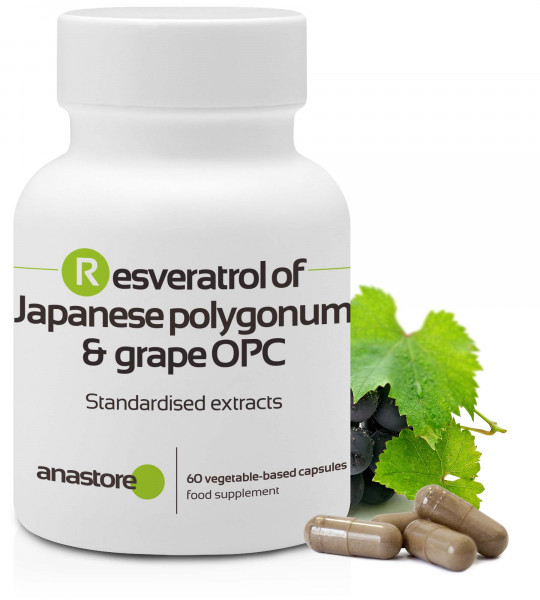 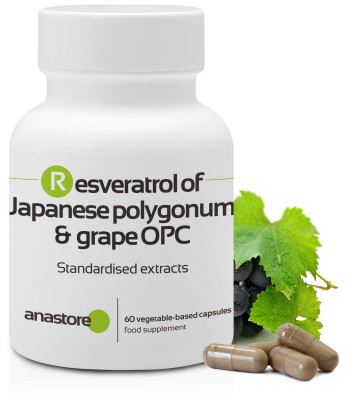 The interaction of these two standardised active principles multiplies their beneficial action on circulation problems:

Grape OPCs (oligomeric proanthocyanidins) are phenolic compounds recognised for their cardiovascular and venotonic benefits. They, relieving sensations of heavy legs and the appearance of varicose veins, improve blood circulation. OPCs also have antioxidant and cholesterol-lowering properties.

Japanese knotweed is known to be the richest source of resveratrol, a powerful antioxidant vital to maintaining good health. It also has anti-inflammatory properties, and acts to inhibit bad cholesterol (LDL).

In addition, resveratrol protects cells against damage caused by free radicals and protects the cardiovascular system by increasing the elasticity of blood vessels.

Resveratrol is a molecule that is particularly present in red grape skin and in the roots of a plant called japanese knotweed (Polygonum cuspidatum). Complex OPCs (Oligomeric Proanthocyanidins) are bioflavonoids, i.e. anti-oxidant substances produced by plants. Notably, they are found in grape pips. These two components respond to numerous health problems, including cardio-vascular problems and varicose veins.

With regard to veins, resveratrol's action is known thanks to the " French paradox " : a supply rich in fat, nevertheless creating fewer cardio-vascular incidents than in Anglo-Saxon countries. Resveratrol actually inhibits the oxidation of LDL cholesterol as well as platelet aggregation. At the same time, it reduces cholesterol and triglyceride levels. It brings on a vasodilator effect in the arterial system. OPCs have very strong anti-oxidant properties, enabling them to slow down or even reverse the damage of atherosclerosis. They also act on poor veins that encourage the forming of varicose veins. They actually ease vein inflammation and resulting pain, encouraging vasodilatation. Without making existing varicose veins disappear, OPCs nevertheless relieve them and can avoid their appearance.

The notification of placing on the market of this product has been made under notification number PL 2081/24.