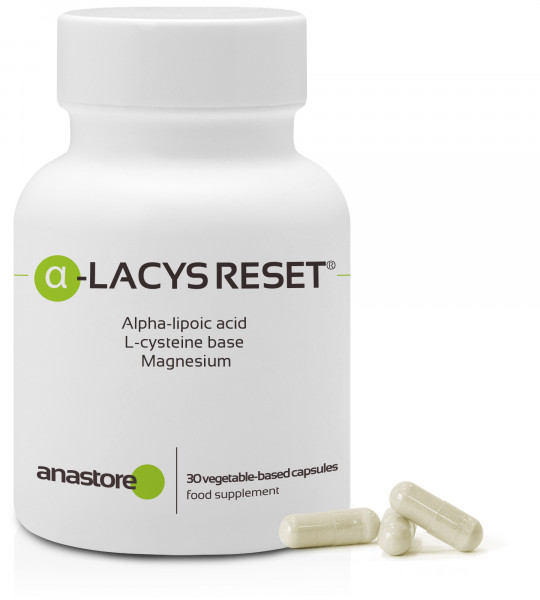 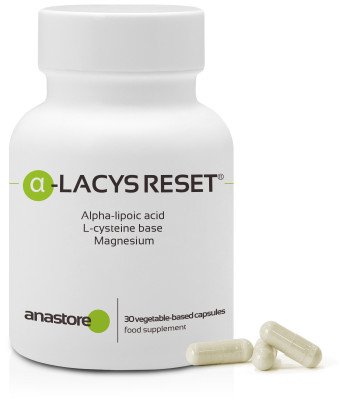 α-LACYS RESET® is a patented complex containing a synergy of alpha lipoic acid, cysteine and magnesium. This synergy controls and neutralises existing free radicals, while rejuvenating the body.

L-cysteine:
Promotes glutathione synthesis action, helping to control oxidation in the body, combatting the effects of aging. It also helps to re-balance hormonal disorders and improves mood during menopause.

*COMMISSION REGULATION (EU) No 432/2012 of 16 May 2012 establishing a list of permitted health claims made on foods, other than those referring to the reduction of disease risk and to children’s development and health.

Α-Lacys reset® is a patented antioxidant synergy containing three active principles: alpha lipoic acid, the amino acid cysteine base, and magnesium. It is designed to modulate the redox balance of cells, i.e. regulate the production of free radicals. Its applications for reducing fatigue and for recovery after athletic exercise have also been scientifically proven: it works to boost aerobic metabolism as an aid to weight loss and as a re-balancer for hormonal disorders caused by the menopause.

HOW THE PRODUCT WORKS: 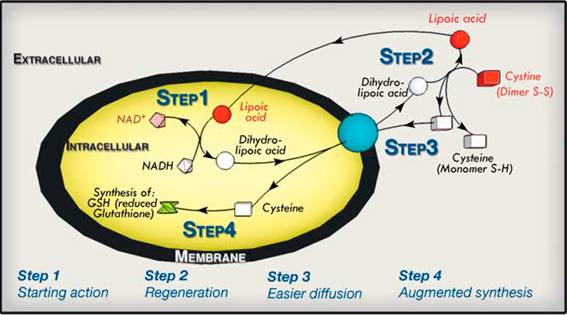 Step 2: The reduced dihydrolipoic acid exits the cell, interacting with a cysteine molecule (two linked cysteines) that will regenerate the alpha lipoic acid and separate the cysteine ​​molecules.

Step 3: The free cysteine will promote glutathione synthesis (a key component for avoiding cellular oxidation that is naturally limited by the absence of cysteine).

Step 4: As a result, glutathione synthesis increases. This enables better control of free radical production in the major site of their synthesis: the mitochondria.

In summary, α-Lacys reset® causes a high neutralisation of the reactive oxygen species (ROS) associated with intense exercise, age and general disorders, while reducing their formation. Its patented formula produces a self-regeneration of the active principles at cellular level, ensuring maximum safety and effectiveness.

Not recommended for pregnant or lactating women. Do not exceed the recommended daily dosage.

Store in a cool dry place away from sunlight

The notification of placing on the market of this product has been made under notification number NUT_AS 2081/30.