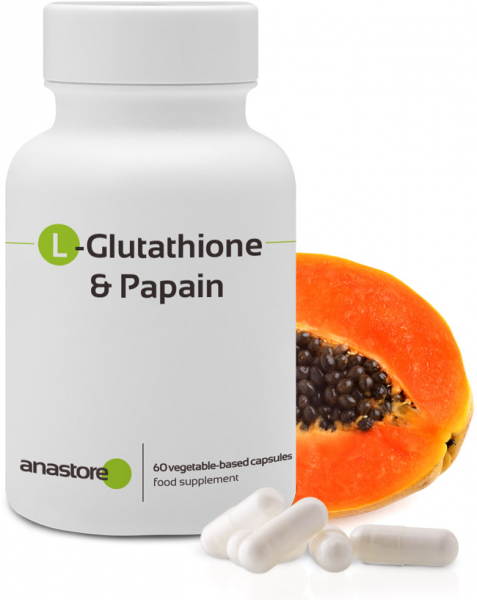 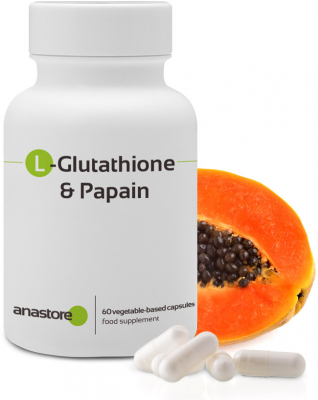 Contains sulphites. Does not contain GMOs.

The active ingredient in papaya, papain, is an enzyme that can break down large molecules, like sugars and proteins, collagen fibres and cellulite, but also those complexes that are immune to antigens and antibodies. It facilitates not only the digestive absorption of food and the elimination of stored fats, but also the renewal of the immune system.

Glutathion, a protein we produce naturally, regenerates immune cells. It is also an effective detoxing agent and a powerful antioxidant.

The synergy of our two active ingredients is the best for fighting against the consequences of aging, as it reinforces the immune system and fights oxidative stress in cells, which are its two principal causes.

The great purity of our ingredients guarantees maximal effectiveness and quality.

The weakening of the immunitary system and cell oxidation stress are the two main causes of many afflictions linked to ageing. Papain and glutathione offer two fundamental answers.

Papain, found in papaya latex, is a mix of proteolytic enzymes, which break down proteins into simpler molecules. Regarding the immuno-defense system, papain mobilises and breaks down complex immuno-macromolecules aggregates consisting of antigens and antibodies, facilitating this way their replacement. The immunitary system plays a major role in numerous physiological processes and is thus an invaluable ally in maintaining health. Papain also stimulates SOD (superoxyde dismutase ) production, an enzyme that eliminates hydroxyl radicals, thus blocking free radicals formation at the its onset. Since SOD acts against inflammation and fibrositis, the use of papain in combating rheumatism is now recognised. Its benefits have also been observed in people afflicted with the HIV virus and Hepatitis B, as well as insulin-dependant diabetics. Finally, papain reduces the side effects associated with radiation and chemotherapy.

Glutathione is a protein that our system produces naturally and is made up of three amino acids (cysteine, glutamate and glycine). It is the immuno-cell regenerator and the most effective detoxifyer of the human organism. Present in nearly all cells, it allows increased production of white blood cells and thus reinforces the immune system against viruses and bacteria. Glutathione also binds to toxins to transform them into water-soluble compounds easily eliminated by bile or urine. Finally it is a potent antioxidant. It directly attacks oxygenated compounds inside the cell and plays a key role in recycling the oxidised forms of vitamin C, thus restoring vitamin C's antioxidant powers.

Use: L - Glutathione and Papaya

2 capsules per day, divided into two doses, at noon and at night, with half a glass of water at mealtimes.

Papaya enzymes are destroyed if following hydrochloric acid-based medication. Not recommended for pregnant or lactating women. Do not exceed the recommended daily dose.