The food for regulating blood pressure and cholesterol 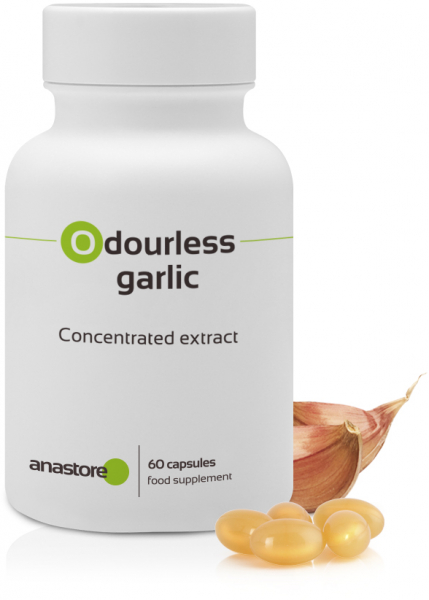 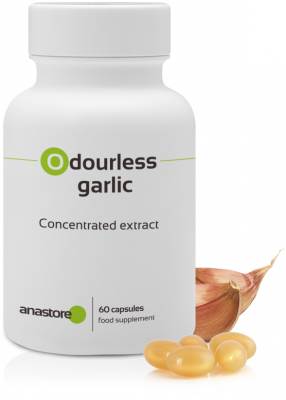 ** Equivalent to 2 g of fresh garlic.

Universally recognised for its multiple properties, garlic (Allium sativum L.) is an essential health ally and has been used for over 5,000 years as a food. It is a powerful, natural antimicrobial, an immunostimulant and also protects cardiovascular health by improving lipid profile and lowering blood pressure.

The key components of garlic include sulphur-containing compounds such as allin, allicin and diallyl disulphide. These have anti-microbial and anti-platelet properties, contributing to garlic’s extraordinary potency.

Our 100:1 concentrated extract of deodorised garlic capsules provide the equivalent of 2 grams of fresh garlic in a single dose.

As a deodorised extract, it has no strong smell or taste, avoiding the problems associated with digesting garlic.

Description and origin
Garlic (Allium sativum L., Amaryllidaceae family) is native to the Siberian desert area of Kyrgyz, and thanks to its nomadic peoples it was brought to China, Arabia, Egypt and the Mediterranean, where it has been cultivated since ancient times1.
It is a herbaceous plant consisting of a bulb formed of around ten cloves (bulbils), and a cylindrical stem measuring around 40 cm with elongated outer leaves and white or pinkish flowers2.

History
The garlic bulb is a typical ingredient in Mediterranean cooking and has been used in traditional medicine as an antiseptic, antimicrobial, antipyretic, anthelmintic and analgesic.
Used for thousands of years, Hippocrates described its effectiveness in case of pneumonia and wound disinfection in his treatise Corpus Hippocraticum3. Due to its known invigorating and fortifying properties, it was included in athletes’ diets during the Olympic Games in Ancient Greece1.
Interest in garlic as a medicine emerged in sixteenth century Europe, when it was seen as a panacea due to its multiple applications. Numerous scientific studies have now proven its properties.

Benefits
Garlic has an antioxidant and lipid-lowering effect; it activates fibrinolysis, is a antiplatelet, antihypertensive peripheral vasodilator, anthelmintic and antimicrobial4.

Studies/research
Garlic is a plant used for over 5,000 years. Clinical trials have demonstrated the effectiveness of garlic in lowering blood pressure when tested against a placebo5. This effect has been linked to action on potassium channels, intracellular calcium concentration and inhibition of angiotensin-converting enzyme.

It has also been linked to increased vasodilation due to sulphur-containing compounds in the garlic bulb: alliin is converted to allicin by the action of the alliinase enzyme4 and in turn, allicin is a precursor of various conversion products (including ajoenes, vinylidenes, oligo sulphurs and polysulphides). Through a series of reactions, it acts on the synthesis of endothelial nitric oxide, increasing vasodilation and lowering blood pressure6. Garlic also improves lipid profile, inhibits platelet aggregation and exerts antioxidant and fibrinolytic activity7.

Together with its use in case of cardiovascular problems, garlic extract is effective in strengthening the immune system and in liver problems7. It is also renowned for its antimicrobial properties, inhibiting the growth of bacteria and fungi3.

2 capsules per day with a glass of water at mealtimes.

Consult your doctor in case of simultaneous use of anticoagulants. Not recommended for pregnant or lactating women. Do not exceed the recommended daily dose.

This food supplement is manufactured by a GMP-compliant laboratory (GMPs are the good manufacturing practice guidelines for the European pharmaceutical industry).
The active principle content is guaranteed through regular tests.

The notification of placing on the market of this product has been made under notification number PL 2081/92.

Synergy of ingredients for an easy respiration