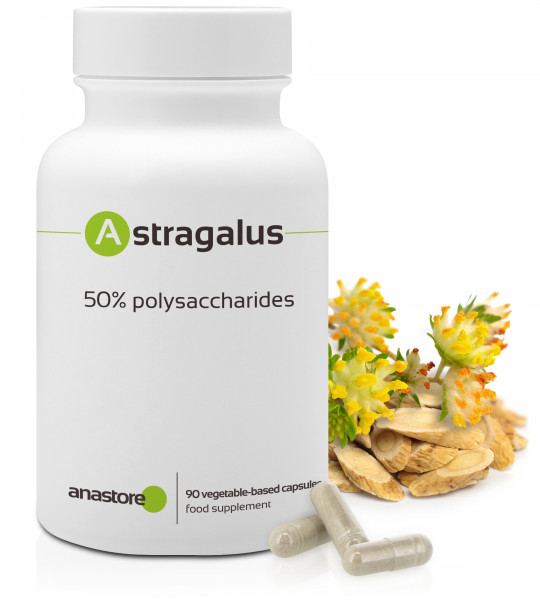 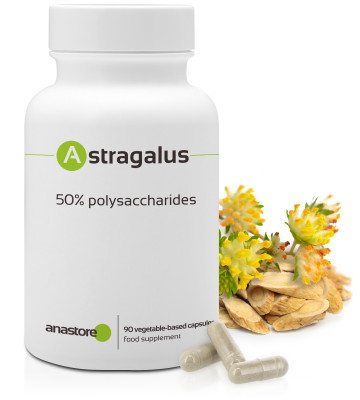 Astragalus (Astragalus membranaceus Moench) or Huang qi has been prescribed in China for centuries, due to its multiple reinvigorating properties.

It is an adaptogenic plant with high levels of active compounds (polysaccharides, astragalosides) that stimulate the immune system, cardiovascular and hepatic systems. It also facilitates the action of macrophages, cells that engulf and attack foreign bodies. This strengthens the body, helping to protect and defend it from bacteria and viruses.

Our astragalus root has high standardised polysaccharide content and offers powerful anti-fatigue effects, while improving the body's resistance to stress.

Astragalus (Astragalus membranaceus Moench) belongs to the Leguminosae family and is known as the Huang qi root in China. It is native to China, Mongolia and Sichuan province, and grows in temperate regions.
It is a perennial plant that grows up to 50 cm, with yellow flowers and many branches. It grows on sandy soils in mountain valleys and on riverbanks. It flowers in August and its roots are harvested in autumn1.

Astragalus membranaceus is documented in the Chinese treatise on plants, Shennong Bencao Jing (200-300 AD)2. In China, Huang qi is sometimes combined with other plants such as angelica and ginseng in formulas that have been used for centuries in Asia in case of diabetes, heart attacks and kidney problems3.

Traditional Chinese medicine considers this plant a source of chi (life force) and blood3. It also has immunostimulant, anti-viral, adaptogenic and vasodilatory properties4, 5.

Astragalus polysaccharides (PSA) have enormous potential thanks to their multiple biological functions. Up to 24 polysaccharides have been identified and isolated in Astragalus membranaceus roots. These have various functions2: immunostimulant, anti-viral, anti-inflammatory, antioxidant, antidiabetic, hepatoprotective, antiatherosclerotic and neuroprotective.
Its immunoregulatory function has been studied both in vivo and in vitro. PSA produce an increase in the number of lymphocytes and gene expression of interleukin-1b and tumour necrosis 𝜶 (both are active in inflammatory reactions and innate immunity), stimulate NK cells, activate macrophages and boost levels of immunoglobulin G and M3. Together these functions result in increased protection and resistance to illness2.
PSAs also have exhibit anti-viral activity closely related to the stimulation of the immune system and increased interferon production (protein produced by the immune system that inhibits virus replication)4, 5. They also exhibit antioxidant and anti-inflammatory activity: one study discovered a reduction in the expression of inflammatory mediators induced by the administration of aqueous extract of Astragalus5.
Finally, Astragalus root has been used in case of rheumatoid arthritis and one study discovered a reduction in swelling and arthritic indicators in joints after administration of PSA2.