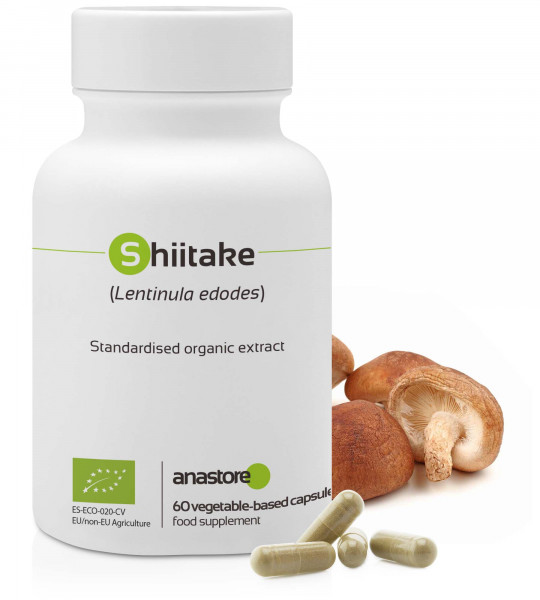 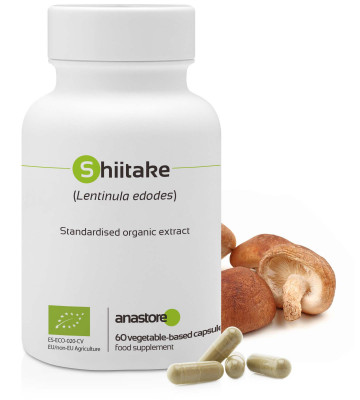 Used for thousands of years in China, shiitake (Lentinula edodes (Berk.) Pegler) is an edible mushroom rich in proteins and polysaccharides, which include lentinan, a beta-glucan with numerous properties.

Polysaccharides in shiitake act as powerful immunomodulators. In addition to being rich in vitamins and minerals, shiitake is an excellent restorative and helps combat fatigue.

Shiitake (Lentinula edodes (Berk.) Pegler) is a fungus native to East Asia1 and has been cultivated for thousands of years in Japan and China. This basidiomycetic fungus grows on trees, degrading cellulose, hemicellulose and lignin in the trunks. Shiitake is also one of the most cultivated fungi in the world, second only to the mushroom (Agaricus bisporus (Lange) Sing.)2.

Known for centuries, use of the shiitake fungus became widespread in China during the Ming Dynasty (1368-1644). Shiitake was considered a tonic capable of alleviating pain, discomfort and fatigue relating to ageing3.

The shiitake fungus is rich in polysaccharides such as the beta-glucans lentinan and LC11. It also contains lipids, proteins, essential amino acids, vitamins (primarily from group B and D) and minerals (sodium, potassium, magnesium, calcium, aluminium, silica, iron, phosphorus and sulphur)4.

Shiitake is a fungus with immunomodulatory, anti-bacterial and antiviral properties5.

Among the polysaccharides present in shiitake, beta-glucans have an immunostimulant function that has been studied for decades6. Early studies into beta-glucans identified that they were capable of stimulating the mononuclear phagocytic system (cells of the immune system), boosting the general defence mechanisms and promoting resistance to tumours by activating various immune responses7. Lentinan stimulates production of antibodies, and it has been observed in experiments conducted on cell cultures that it stimulates the cells of the immune system to attack cells infected by viruses3.

According to some studies, the polysaccharides present in shiitake could also be potential prebiotics (stimulating the growth and activity of probiotics), and a recent laboratory study demonstrated the effectiveness of polysaccharides in shiitake for boosting immunity and improving intestinal health5. Finally, the lipid-lowering activity in shiitake is also due to beta-glucans, since they reduce the absorption of cholesterol and inhibit the enzyme HMG CoA-reductase, an enzyme involved in the metabolism of cholesterol, inhibition of which reduces the serum levels of cholesterol8.