Discover the exceptional properties of SUPERFOODS with our new brand POWDER Nothing But Plants® range!

This product range offers an innovative concept: an alternative way of consuming dietary supplements and eating healthier foods – in shakes, salads or mixed with your favourite foods. 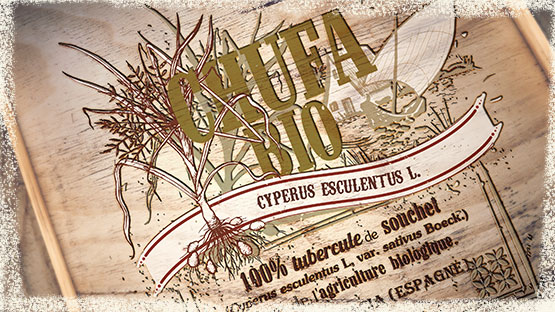 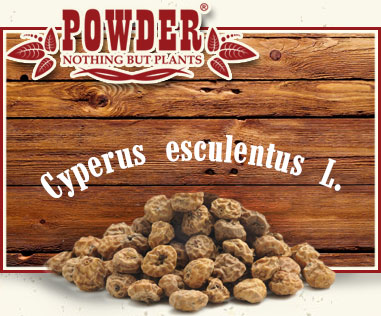 Horchata is obtained from this tuber, a very popular drink in Spain that is increasingly consumed in other countries. Horchata not only has a delicious flavour, it also helps to prevent cardiovascular problems and it is recommended for those with digestive problems.

The tiger nut is a nutritious food with a delicious taste. Prepare your own horchata with our organic chufa de Valencia tiger nuts or enjoy them raw, soaked in advance for 24 hours!

The yellow nutsedge, chufa sedge or tiger nut (Cyperus esculentus L. var. sativus Boeck, Cyperaceae family) is a perennial plant with elongated leaves that can grow up to 1 metre and produces edible tubers known as the tiger nut. These tubers measure between 0.9 and 1.6 cm in length, and 0.7 and 1.1 cm in width (1-2).

In Spain, tiger nut cultivation is concentrated in the Valencia region (more specifically the Horta Nord area), where it has a long tradition and economic importance. The tubers are planted during April, and a constant supply of water is crucial during their growth cycle. Harvesting takes place in November and December: the aerial part of the plant is removed and the soil is turned over to extract the tubers (3). 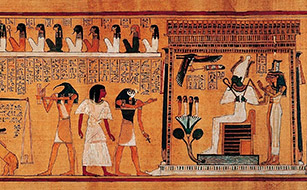 Use of tiger nuts as food dates back thousands of years, and tiger nut tubers have been found in the sarcophagi and tombs of the first Egyptian dynasties. In Tutankhamun's tomb, the remains of tiger nuts were found among the delicacies the Egyptians offered to their pharaoh on his journey to the other world (4).

Tiger nuts also have multiple health benefits linked to their high fibre content: they activate blood circulation, have cardioprotective properties, and help to prevent numerous diseases such as gastrointestinal problems, diabetes and obesity (5-7).

According to Ayurvedic medicine, tiger nuts can also be used for their aphrodisiac properties. In the Middle East, they are known as “Hab Al-zulom” (the seeds of men) and are often given to grooms on their honeymoon as a sexual invigorator (8).

You can enjoy the health benefits and pleasant taste of tiger nuts in different ways: in horchata, and as flavouring in ice cream, jams and pastries. The easiest method is to soak the raw tiger nuts for at least 24 hours before consuming.

Horchata is a drink made from tiger nuts, water and sugar. Follow these steps to prepare our own horchata (9-10).

The beneficial properties of tiger nuts and horchata have been the subject of various studies.

Tiger nuts contain important nutrients, some of them essential micro and macronutrients necessary for maintaining good health. One study analysing the phytochemical composition of tiger nut tubers and their biochemical effects concluded that their consumption reduced blood glucose levels (11).

It has also been found that horchata can be effective in preventing atherosclerosis (hardening of the arteries), since consuming it can activate blood circulation and help to prevent cardiac problems. These properties have been linked to its unsaturated fatty acids and arginine, an amino acid precursor of nitric oxide (5).

Finally, the anti-diabetic and anti-obesity properties of tiger nuts were evaluated in a short-term study.  In this study, it was concluded that supplementing a low-calorie diet with tiger nut flour could aid weight loss and bring an improvement in metabolic disorders in patients with diabetes and obesity (12).

Soak the tiger nut for 24 hours before consuming. It can be used for prepare horchata.