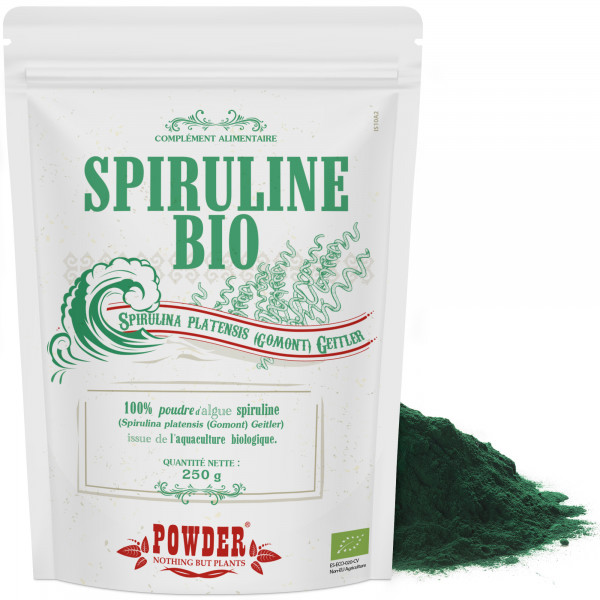 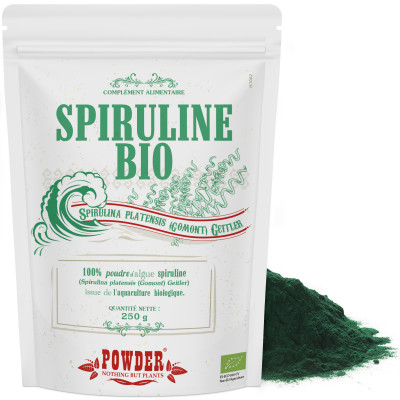 Spirulina (Spirulina platensis (Gomont) Geitler) is a blue-green algae that has been consumed for centuries due to its amazing nutritional properties. It contains multiple minerals and vitamins and is also very rich in proteins, which it converts into a food supplement ideal for vegetarians and vegans. 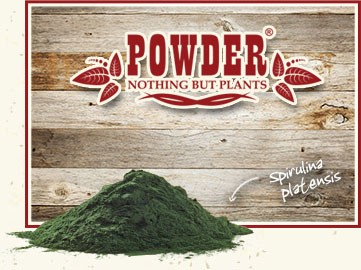 Spirulina has antioxidant and immunostimulant properties, and helps to reduce fatigue and improve physical performance. Its high vegetable protein content makes it an ideal supplement for people who want to increase their muscle mass. It also contains mucilage, which, together with proteins, generate a feeling of fullness, helping to control appetite for those on a diet.

Our spirulina is produced from organic aquaculture and has been subject to stringent quality control to certify that it is free from heavy metals and complies with the microbiological criteria required by European Pharmacopoeia.

Spirulina (Spirulina platensis (Gomont) Geitler) is a cyanobacterium, or blue-green algae, with photosynthetic capacity, formed of filaments with a distinctive helical structure and which grow in alkaline waters. Its main photosynthetic pigment is phycocyanin, which is blue in colour (1).

Spirulina grows in alkaline waters in tropical and subtropical regions including Mexico, Asia and Central Africa (2). 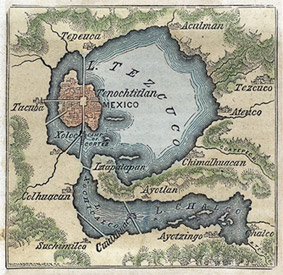 Spirulina has been consumed in Mexico and Africa for centuries. In Aztec civilisation, spirulina growing in Lake Texcoco was harvested and dried for subsequent preparation as food (2). In Africa, members of the Kanembu tribe around Lake Chad were found to have no nutritional deficiencies, due to consumption of spirulina (1).

Spirulina is currently one of the most widely-consumed food supplements and over 3,000 tons are grown each year worldwide to meet demand (3).

Because of its high nutritional value, spirulina is recommended in slimming diets, during periods of intense physical activity, in cases of nutritional deficiencies, and periods of fatigue or stress (4). It is also been found to have antioxidant, anti-inflammatory, immunomodulatory and hypolipidemic (lipid-lowering) properties (2).

Various studies point to the health benefits of spirulina. One study identified an improvement in physical performance after ingesting spirulina for four weeks, due to its antioxidant effect (5). This effect has also been linked to a positive effect muscle damage during physical exercise (6). Spirulina also helps to reduce mental and physical fatigue (7).

Spirulina's anti-inflammatory, hypolipidemic and hypoglycemic properties have also been proven: it helps to lower glucose, total cholesterol and LDL (bad cholesterol) in the blood, while increasing HDL cholesterol (good cholesterol). The decrease in blood lipid concentration from consuming spirulina has been linked to an increase in the activity of lipoprotein lipase, an enzyme involved in lipid transport and metabolism (2).

Besides being rich in vitamins, proteins, minerals and amino acids, spirulina contains phycocyanin, a pigment used as a colorant but that also has proven antioxidant, immunostimulant and anti-inflammatory properties (8).