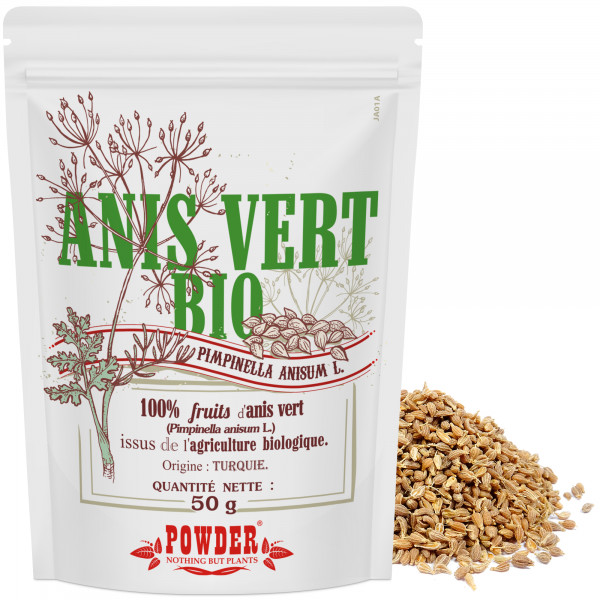 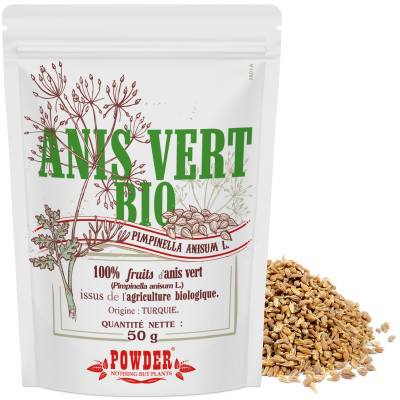 The ESCOP (European Scientific Cooperative on Phytotherapy) and the Commission E recommend using the fruit of anise for treating dyspeptic disorders and upper respiratory tract congestion.

A traditional remedy for millennia, green anise (Pimpinella anisum L.) possesses numerous therapeutic properties (antioxidant, antiseptic, antimicrobial ...), and is especially prized for its significant ability to act as a digestive aid and expectorant. 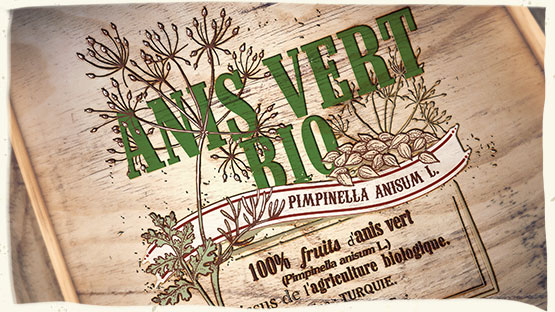 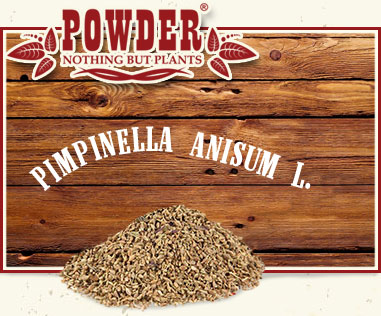 Rich in essential oil, green anise is known for its intense sweet highlights.

Enrich the flavour of your recipes with the sweet aroma of our enchanting ecological green anise!

Green anise, or aniseed (Pimpinella anisum L.) belongs to the Apiaceae family (which includes fennel, carrot, parsley ...). Green anise plants can reach a height of 70 cm. Its flowers are small and white, while the fruit has a strong fragrance, and is brown in colour with 5 thread-like grooves (1).

Originating in the Middle East (2), it grows in West Asia, Mexico, Egypt, the eastern Mediterranean and Spain (3). 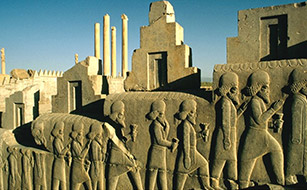 Since ancient times, anise has been used both for its medicinal properties and for its culinary virtues (2). It has been employed for 4000 years (4) in traditional Iranian medicine. Green anise is mentioned in the Bible, where the spice is considered useful for paying taxes, similar to mint and cumin (1).

Currently, green anise is used in the food industry as a flavouring in ice cream, candy, gum, and processed fish products (3).

The European Medicines Agency approved the use of anise for the symptomatic treatment of spasmodic mild digestive disorders (bloating and flatulence), and as an expectorant in coughs associated with colds (5).

Anise possesses numerous beneficial properties, such as its ability to act as an antioxidant, antimicrobial, antifungal and analgesic (4). In addition, it is carminative (promotes outgassing) and acts as an expectorant (6).

The fruit of anise contains carbohydrates, proteins, fatty acids, flavonoids, and essential oil rich in trans-anethole (3,6), mainly responsible for the pharmacological properties of the fruit and its aroma and flavour (6).

For medicinal purposes, the recommended dose of aniseed in infusion is 1-3.5 g of whole or chopped fruit in 150 ml of boiling water, up to 3 times a day (5).

For cooking, green anise can be used in many dishes, especially in bakery goods, to which it imparts a sweet taste. Below, we list two recipes in which this aromatic spice is used.

The association of the most powerful laxatives from phytotherapy