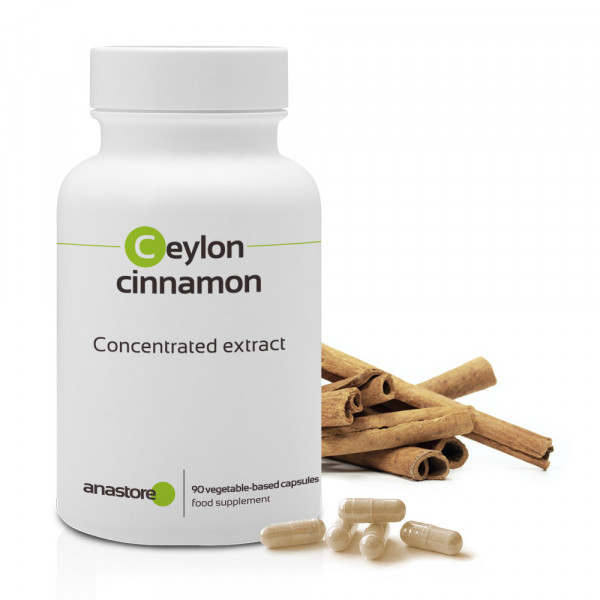 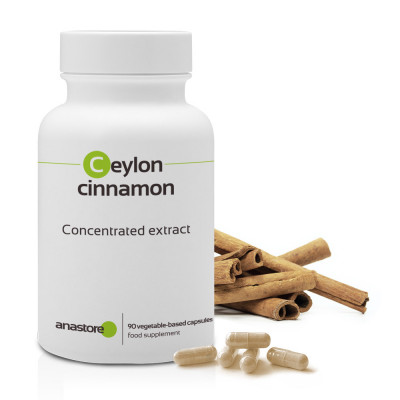 A spice used for thousands of years, Ceylon cinnamon (Cinnamomum verum J. Presl) has valuable properties and has been used in Ayurveda and traditional Chinese medicine as a neuroprotective and in case of digestive, gynaecological and respiratory problems.

Ceylon cinnamon is now recommended primarily for lowering blood glucose levels and alleviating digestive problems such as dyspepsia. It also has antioxidant, antibacterial and anti-inflammatory properties.

Our 4:1 concentrated extract of cinnamon guarantees maximum quality and effectiveness. Unlike Chinese cinnamon, which contains a high concentration of coumarin, a compound that can be harmful if consumed in large quantities, Ceylon cinnamon only contains traces of coumarin.

Ceylon cinnamon, or true cinnamon, is obtained from the Ceylon cinnamon tree (Cinnamomum verum J. Presl, Lauraceae family), a tree that can grow 10 m tall and grows wild in the forests of Sri Lanka and southern India. Its leaves are elongated, bright and yellowish-green; and it has small white, greenish or purple flowers1.

Cinnamon is a spice obtained from the peeled bark of the branches of the trees of the Cinnamomum2: the outer bark is discarded and the inner bark is rolled and dried to obtain the cinnamon stick. In cinnamon, in addition to the bark, the leaves, flowers and fruit are used to prepare essential oils for cosmetics and food products3.

Cinnamon bark has been used for thousands of years as a spice. Documents refer to cinnamon being importing to Egypt from China; it is mentioned in the Bible (Exodus and Proverbs) and appears in Chinese texts dating back 4,000 years4. In the 16th Century, Portuguese conquerors discovered Ceylon cinnamon in Sri Lanka and introduced this spice into European countries during the 16th and 17th centuries3.

In addition to being used as a spice, cinnamon was also used for embalming in ancient Egypt3 and for digestive, gynaecological and respiratory problems in Ayurveda2, 5. In China, where it is used as a neuroprotective and for diabetes, it is a highly prized plant3.

The bark of Ceylon cinnamon contains two main types of compounds: polyphenols and volatile phenols. The polyphenols in Ceylon cinnamon include vanillic, caffeic, gallic and p-coumaric acid. The composition of its volatile compounds varies depending on the part of the plant used. This means that the bark’s essential oil is rich in cinnamaldehyde3.

Various in vivo and in vitro studies have demonstrated the multiple beneficial effects of Ceylon cinnamon, such as anti-inflammatory, antioxidant and antibacterial properties; a decrease in cardiovascular disease and stimulation of cognitive functions2.

Cinnamon also has hypoglycaemic activity (lowers blood glucose levels) and its use in cases of type 2 diabetes has been investigated in several clinical trials6, 7. In vivo and in vitro testing has demonstrated the beneficial effects of cinnamon extract on diabetes, such as reduced levels of fasting blood glucose, increased HDL cholesterol and a reduction in HBA1c (glycated haemoglobin)2, 5.

3 capsules per day divided into three doses with half a glass of water, at mealtimes.