POWDER Nothing But Plants 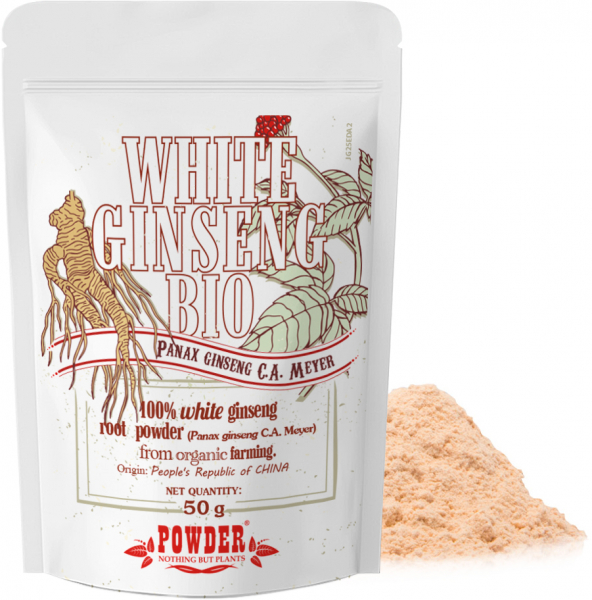 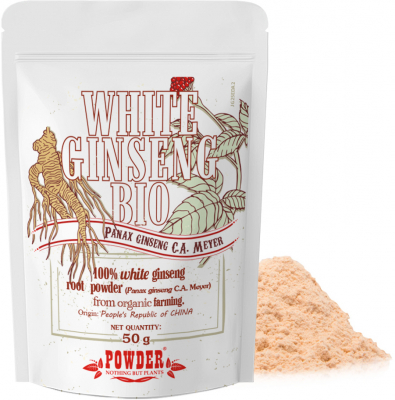 Used for thousands of years in China, ginseng is considered a panacea.

An adaptogenic plant, it contains ginsenosides, active molecules that give it antioxidant, immunomodulatory and neuroprotective properties. 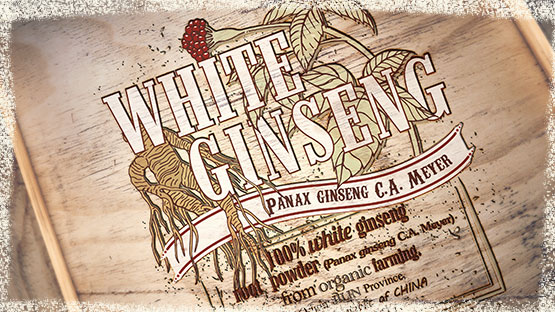 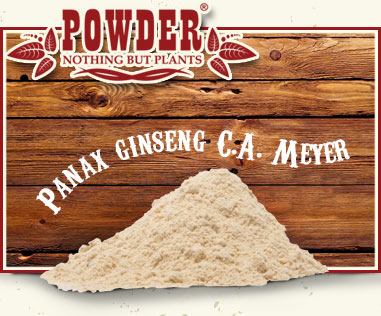 The different categories of ginseng include white ginseng, which is consumed peeled and dried in the sun.

It needs to be cultivated for 4 to 6 years before being harvested, so its ginsenoside content is particularly high.

Try our organic white ginseng powder and boost your energy and vitality!

Ginseng (Panax ginseng C.A. Meyer, Araliaceae family) is a perennial plant native to the mountainous regions of Asia, and is currently grown in several countries (Korea, Japan, China, Russia and Germany) (1). It has a thick, fleshy root that is whitish in colour, small green flowers and intense red fruits (2).

Ginseng can be classified into different categories: fresh, white and red. Fresh ginseng is less than 4 years' old; white ginseng is between 4 and 6 years' old and is consumed after being peeled and dried in the sun. Finally, red ginseng is harvested after 6 years of cultivation, then steamed and dried (1). 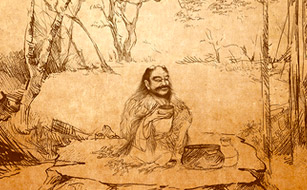 Use of ginseng dates back thousands of years. 5,500 years ago, Shennong (known as the Yan Emperor or Yellow Emperor, credited with introducing herbal medicine) tested hundreds of plants, including ginseng, to identify their properties. The work was later recorded in the “Shennong Bencao Jing” text, in which ginseng root was included in the non-toxic plants that could be consumed regularly and which increased vital energy (1).

Since the last century, ginseng has been the subject of numerous scientific studies (3) and is now a very popular plant throughout the world consumed as a food and food supplement  in more than 35 countries (4).

Ginsenosides are the main active compounds of ginseng (6.). The quantity of these compounds contained in ginseng root significantly increases with the age of the plant. A four-year-old plant therefore contains around three times more ginsenosides in its root than a plant that is one year old (3).

Ginseng is considered an adaptogenic plant (5), a term that refers to compounds that provide the body with non-specific resistance to illness and stress (7). As well as being known to increase energy and vitality, ginseng root has been used to stimulate the immune system, control blood pressure and strengthen the cardiovascular system. It also has antioxidant, neuroprotective and hypoglycemic properties (8.).

The recommended dose is 2 g of white ginseng powder per day, divided into two doses. Can be mixed with water, juice, shakes or milk. It can also be sprinkled onto meals and salads.

Ginseng root has been used to alleviate symptoms of asthenia (fatigue and weakness) (9).

Various studies have tested the anti-fatigue and tonic properties of ginseng (3, 10). In a randomised double-blind, placebo-controlled study in which ginseng extract was administered to individuals suffering from chronic fatigue, it was concluded that those who had taken the extract showed an improvement in symptoms related to mental fatigue, compared with those who were given the placebo. This anti-fatigue activity (mood and mental performance are linked to chronic fatigue) was associated with ginseng's antioxidant properties (10).

Finally, ginseng has also been found to have cardiovascular benefits (3). One study evaluating the effect of white ginseng extracts rich in phenolic compounds on hypercholesterolemia concluded that these extracts may help reduce the spread of atherosclerosis by decreasing oxidative stress (11).