Nothing But Plants® POWDER 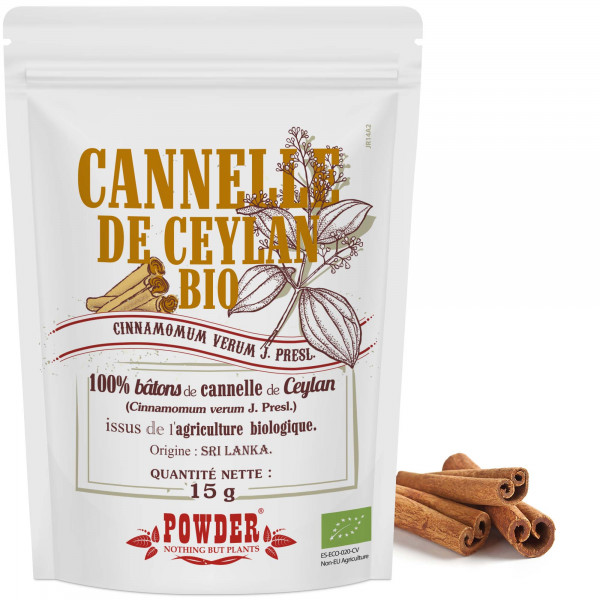 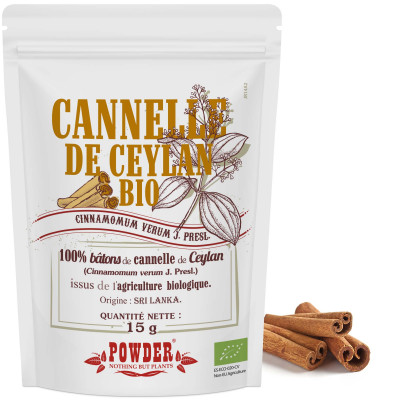 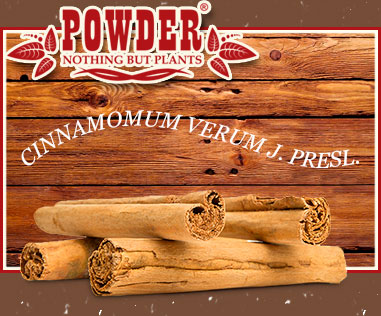 Indispensable in gastronomy for thousands of years, not only does Ceylon cinnamon enhance recipes with its accentuated woody aroma and mild, sweet flavour, it also benefits the body, due to its numerous properties. Anti-inflammatory and antioxidant, it also supports the digestive system and combats diabetes.

Ideal for all your recipes, whether sweet or savoury, our organic Ceylon cinnamon POWDER comes from Sri Lanka, a guarantee of exceptional quality.

Cinnamon is obtained from the Ceylon cinnamon tree, or true cinnamon tree (Cinnamomum verum J. Presl, Lauraceae family). Native to Sri Lanka and southern India, this tree can grow up to 10-15 metres tall. It has shiny leaves and small greenish flowers with an unpleasant smell, which produce a purple fruit (1).

To obtain cinnamon, branches that are over 2 years’ old are cut to 1.5 metre lengths. The bark is then separated, kept in the shade, scraped and dried. The spice then curls into rolls resembling quills, or becomes powder (2). 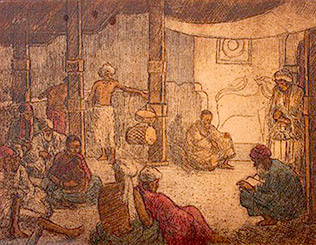 Cinnamon was one of the first spices prized and enjoyed by humans, as a perfume, incense, flavouring agent and for its properties (3).

It was used in ancient Egypt for embalming. For the Greeks and Romans, it was such a valuable commodity that it was only allowed for royalty (4). Cinnamon was of such importance that it was called ‘the spice of life’ (5).

Cinnamon is now used for its cosmetic and nutritional properties (6). Sri Lanka, the island with the best conditions for its cultivation (2), is the world’s largest producer (60% of trade) (1). 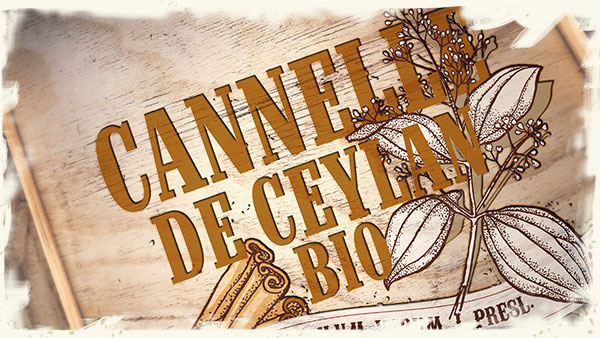 The European Medicines Agency (EMA) now approves its traditional use to alleviate mild gastrointestinal discomfort (7), and it is recommended by the Commission E to combat loss of appetite and dyspepsia (8).

Nutritionally, cinnamon is rich in calcium, phosphorus, vitamin A, B1, B2, vitamin C and niacin (1). It also contains antioxidant polyphenols, terpenes with a spicy aroma, and essential oils, particularly cinnamaldehyde (65-80%) and eugenol (10%) (6, 9).

Cinnamon is an essential ingredient in numerous beverages, desserts and dishes.

Below are two recipes in which this delicious spice is used.

As a spice, cinnamon is used to preserve and to season foods, in order to make sauces, sweets, candies, and drinks. The reference quantity is 2-4 gr of cinnamon bark per day.