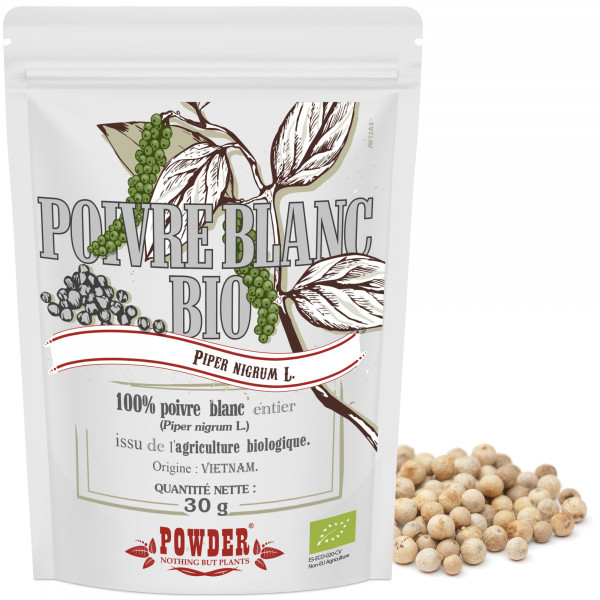 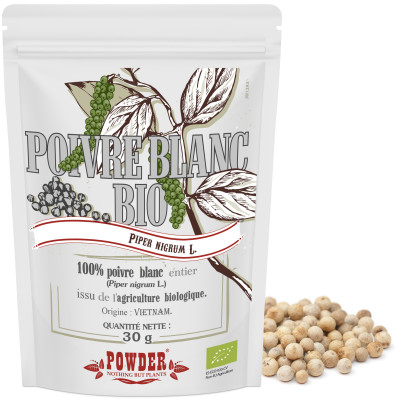 Pepper, derived from the berry of Piper nigrum L., is certainly the most used spice. As essential as salt, no dish is complete without this condiment! 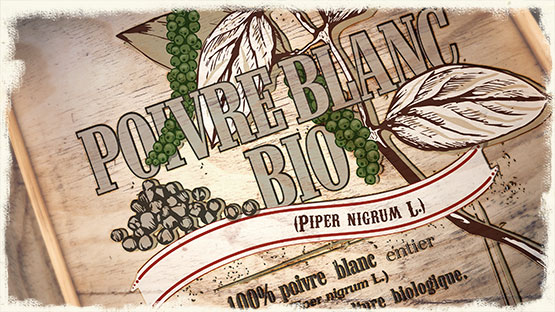 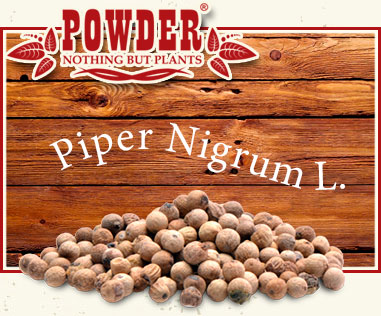 With is lingering flavor, our white pepper POWDER has a slightly piquant aroma, soft and refined, perfect for delicate dishes.

The pepper, Piper nigrum L., is a plant that can reach a height of five meters. Haling from the state of Kerala, in the south-west of India (1), its fruit, the pepper, changes color according to the stage of maturation: first green, later red, then black, the most consumed stage.

White pepper is obtained from fully ripe fruit, after removal of the pericarp (red skin), fermentation and drying (2, 3). 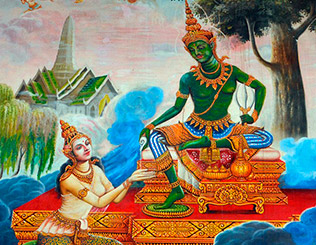 Pepper is a traditional Ayurveda remedy for colds and fevers, already mentioned in early millennial Indian writings. In Antiquity, pepper was not grown, but it was gathered in the forest for its beneficial properties (1, 2). It was sought after for its fungicidal and bactericidal action, which was beneficial to the preservation of food (4), but it was also used as a currency for trade with the East (1).

Because of their high market value, spices were the driving force behind the search for a sea route to the Indies, also called the Pepper Empire, including the famed expedition of Vasco de Gama in 1497. Nowadays, pepper is universally used in cooking, but also for the control of digestive disorders (2).

Pepper possesses beneficial properties thanks to the presence of essential oils and spicy alkaloids, such as piperine. However, during the process of obtaining white pepper, most of the seed's essential oils are lost, making its flavour and aroma softer than that of black pepper (2, 5, 6).
The piperine from white pepper acts mainly as an anti-inflammatory agent. Moreover, according to numerous studies, it possesses key sedative, analgesic, antipyretic (for the control of fevers) and spasmolytic (7) properties.

White pepper has an intense aroma and flavor, but more delicate than the black pepper’s one.
In kitchen, white pepper is chosen for aesthetic reasons (light-colored dishes and white sauces) and to lighten without obliterating the taste of certain dishes, such as those based on white meat or fish.

In the kitchen, white pepper is chosen more often for aesthetic reasons (light-colored dishes and white sauces) and to lighten without obliterating the taste of certain dishes, such as those based on white meat or fish.