For benign hypertrophy of the prostate 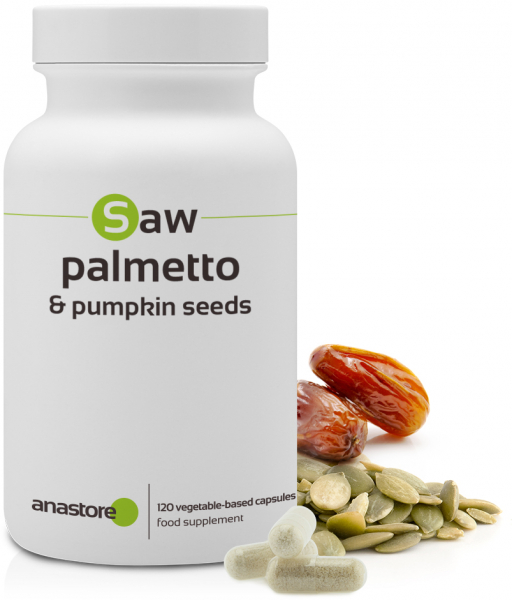 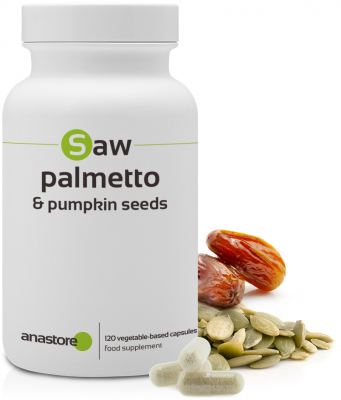 The combination of the best active ingredients of these plants contributes to retarding the development of prostatic tissue linked to age (particularly in cases of light to moderate hyperplasia of the prostate (phases I and II)) and to soothing urinary difficulties.

The combination of these two plants does not have the undesirable effects on sexual function that synthetic medicines can have.

Traditionally used by Seminole Indians, the dwarf palm plant (sabal palmetto) is known for its effectiveness in the micturition problems associated with benign prostatic hyperplasia. It is also a well-known diuretic.

Several clinical studies have demonstrated the effectiveness of the dwarf palm plant in reducing the symptoms of benign prostatic hypertrophy, a problem affecting half of all men over 60.

The action mechanism of the dwarf palm plant (Serenoa repens (W. Bartram) Small) remains uncertain: the plant could promote natural death (by apoptosis) of the cells of the prostate and/or inhibit the conversion of testosterone into dihydrotestosterone, a substance which promotes the development of prostatic tissue1, 2. It also has an anti-inflammatory effect.

Pumpkin seeds are traditionally used as diuretics. Their oil is reputed to inhibit the formation of prostatic tissue and reduce inflammation of the prostate. It relieves the problems with micturition associated with benign prostatic hyperplasia.

The way in which pumpkin seeds work has not been determined. It is certainly related to the various substances they contain, in particular unsaturated fatty acids (omega-3 in particular), zinc and phytosterols.

The alliance of these two plants of recognised effectiveness is a guarantee of additional effectiveness: it has also been established that regular consumption of a product made up of dwarf palm plant and pumpkin seeds (Curbicin) significantly improves urinary symptoms, compared to that of the placebo group, in a study conducted on 53 men3.

And lastly, these plants do not have any of the undesirable effects on sexual function. They also improve symptoms in the most serious cases of prostatic hyperplasia.

Use: Sabal palmetto and pumpkin seed

2 capsules a day with half a glass of water before mealtimes.

Consult your doctor or pharmacist. Not recommended for pregnant or lactating women. Do not exceed the recommended daily dose.

The notification of placing on the market of this product has been made under notification number PL 2081/28.