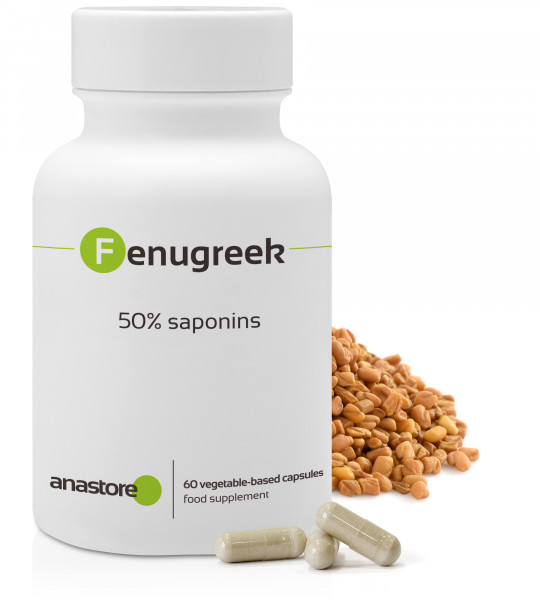 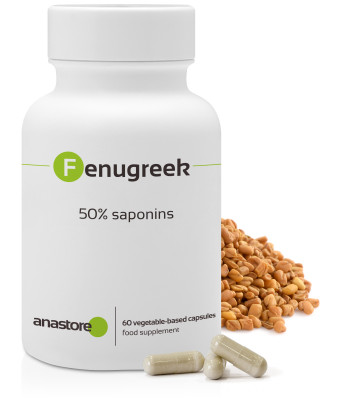 Our Fenugreek seed extract has the highest concentration of steroidal saponins on the market (50%), making it extremely effective in increasing free testosterone levels.

Native to the Mediterranean and Asia, fenugreek is one of the oldest known culinary plants in the world. It is mainly used due to its androgenic and tonic properties.

Rich in antioxidants, fenugreek helps to protect the body from the formation of free radicals generated during exercise.
In addition to boosting recovery after exercise, it helps increase muscle mass faster, while ensuring nutrient intake is used more effectively.

It is high in fibre and rich in vitamins, phosphorus, iron and protein, which gives it a tonic effect, stimulating appetite in malnourished people and restoring energy to those recovering from illness.

Fenugreek (Trigonella foenum-graecum) is a plant native to the Mediterranean and southwest Asia. Its name derives from the Latin for “three angles”, because its corolla has three leaves forming an imaginary triangle. Traditionally, it was widely used by the Greeks, Egyptians and Romans as a general tonic and stimulator of the immune system4.
Studies have since confirmed these properties and have shown that taken after exercise, it improves recovery by increasing muscle glycogen synthesis1, increasing levels of free testosterone and its bioavailability2.
Fenugreek also protects against free radicals generated during exercise, due to its antioxidant capacity5. It is also recommended as a complement in diets against obesity, due to its lipid-lowering action, i.e. its ability to decrease blood lipid levels (cardiovascular risk factor). It also has an anti-inflammatory effect on joints, which tend to swell during exercise.

Finally, fenugreek has been used as an alternative to oral hypoglycemics3, due to the combined action of the coumarins, nicotinic acid and trigonelline (saponin) it contains, and the mucilage lining the cells of the mucous membrane slowing the absorption of nutrients.

OUR EXTRACT: Fenugreek seed extract containing a minimum of 50% saponins, the active substance responsible for its tonic and hormone modulation properties.
Fenugreek extract is also subjected to stringent microbiological control and monitoring for heavy metals, in accordance with European Pharmacopoeia criteria.

MAIN PROPERTIES OF THE PRODUCT:
•    When taken after exercise, improves recovery by increasing muscle glycogen synthesis1.
•    Its androgenic effect increases testosterone, increasing levels of free testosterone and its bioavailability2.
•    Fenugreek helps control blood glucose levels and insulin resistance3.
•    Has a stimulatory effect on immune response by increasing lymphocyte production4.
•    Protects against cell damage, due to its antioxidant capacity5.

2 capsules a day with half a glass of water at mealtimes.

Do not use in case of pregnancy and lactation. Do not exceed the recommended daily dose.

A pure, sustainable, high-quality product for a balanced diet