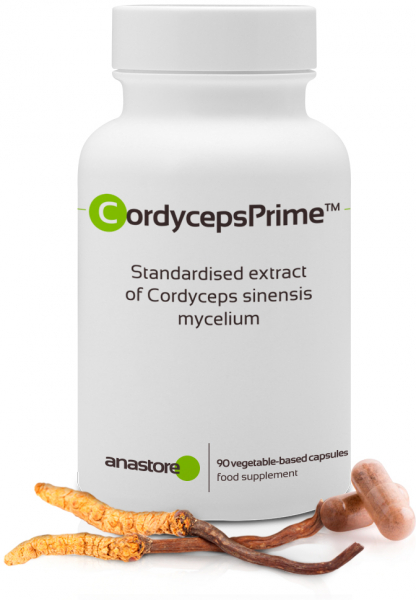 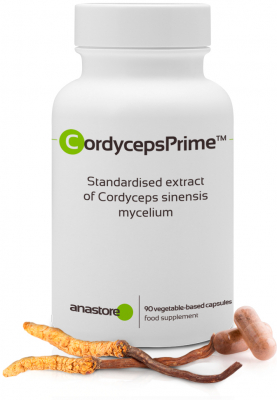 Cordyceps sinensis is an amazing mushroom from the Cordycipitaceae family, commonly used in China, whose mycelium grows in the body of a caterpillar.
It high value is due to its rarity and many benefits; for this reason it is often referred to as “brown gold”.

CordycepsPrime™ CS-4 has been selected for its exceptional properties:

Cordyceps is an excellent supplement for combating ageing. Studies have shown that cordyceps extract boosts the activity of antioxidant enzymes (SOD), while reducing oxidation of lipids and inhibiting the activity of monoamine oxidases (a family of enzymes that degrades neurotransmitters such as serotonin).

A powerful tonic, it boosts physical energy and contributes to a significant improvement in athletes’ athletic performance.
It is also an aphrodisiac that helps boost sexuality in both men and in women.

A major adaptogen, it offers increased resistance to stress.

Description
Cordyceps sinensis is an entomopathogenic and endoparasitic fungus that lives on the Tibetan Plateau, in China, Bhutan, Nepal and north-eastern regions of India, at altitudes of 3,000-5,000 m. It is highly valued and has been used in traditional Tibetan and Chinese medicine for centuries. Legend and mysticism surround this fungus, due to its distinctive life cycle and the area from which it originates.

CordycepsPrime™, produced using biotechnology
CordycepsPrime™, an extract from mycelia (vegetative part of a fungus) of Cordyceps sinensis, is obtained through a patented cultivation and fermentation process. The strain of Cordyceps used to obtain this extract (CS-4 strain) has been the subject of various research studies supporting its effectiveness1.

Benefits
CordycepsPrime™ improves sexual function as well as boosting energy, stamina and vitality. It also improves respiratory and cardiovascular function and has antioxidant properties that contribute to its anti-aging effect.

Studies/research
In China, Cordyceps sinensis has been used to male impotence and sexual dysfunction2. It has also been used to improve physical performance. It has immunostimulant properties and has been used to reduce respiratory, kidney, liver and cardiovascular disorders1.

Numerous research has linked an improvement in sperm quality, sexual desire and libido to taking C. sinensis extracts. The improvement in sperm quality may be due to its richness in vitamins, zinc and amino acids3.
Several studies have also established its anti-stress and anti-fatigue effect4 associated with an increase in ATP levels, the molecular energy of cells, and improved efficiency in oxygen use2.

Cordycepic acid has diuretic, antitussive and antioxidant properties5, while nucleosides are involved in regulating and modulating various physiological processes in the central nervous system5, 6. The nucleoside cordycepin (3’-deoxyadenosine) has anti-inflammatory properties1, 5 and effects that reduce the concentration of total cholesterol, low density lipoprotein and triglycerides in the blood7.

Finally, it has been demonstrated that the properties of mycelia cultivated from Cordyceps are as effective as those from specimens of Cordyceps found in the wild8. The effectiveness of fermented mycelium extract is supported by numerous studies that have identified, among other effects, an improvement in respiratory function compared to the placebo, in cardiovascular and kidney function2, a significant increase in testosterone and estradiol levels in men and women with low libido, and a hypolipidemic effect that reduces total cholesterol level8.

3 capsules per day divided into three doses with half a glass of water, at mealtimes.