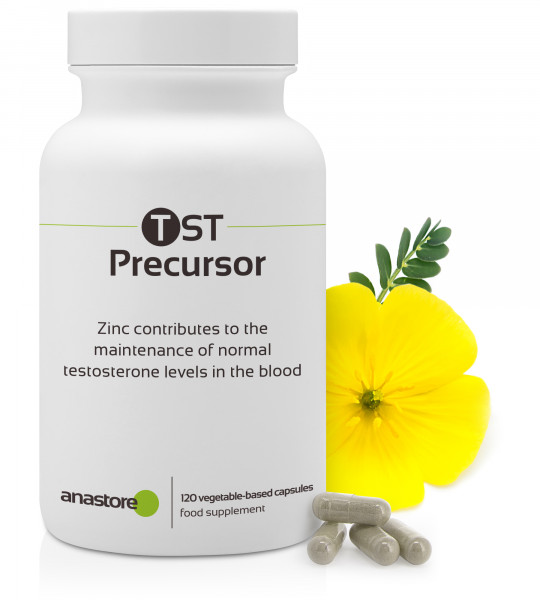 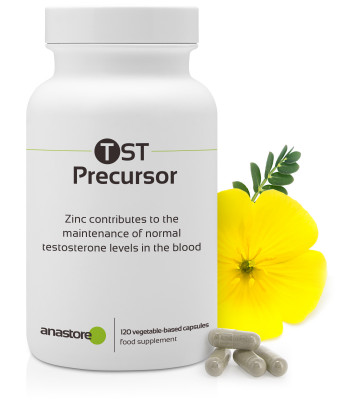 Zinc contributes to the maintenance of normal testosterone levels in the blood.

Vitamin B6 contributes to the regulation of hormonal activity.

Magnesium contributes to a reduction of tiredness and fatigue.

Our new formula has increased concentration of forskolin, vitexin, isoflavones and magnesium for maximum efficiency.

Based on plant extracts with a high active component content, our formula boosts hormone function in the body.

Our Precursor TST reduces signs of feminisation because it acts as an aromatase inhibitor (aromatase is an enzyme which converts testosterone into oestrogen).

Supported by a minerals complex (zinc, magnesium), the testosterone released remains active and is able to have maximum effect on the body.

Forskolin, present in our Precursor TST, acts in synergy with testosterone to promote fat loss.

Testosterone begins to decline after age 30. Aromatase can convert this hormone into an inactive hormone (a process called aromatisation) or into oestrogen, causing a loss of physical and mental vitality in men.

To counter these effects, we have collected natural elements capable of promoting increased endogenous secretion of testosterone, while optimising its health benefits.

Testosterone is the male hormone par excellence, it helps to develop muscle mass and promotes stamina, charisma and competitiveness. Linked to male physical and psychological development, it is a hormone coveted for its benefits. Optimal secretion of testosterone ensures good health, a powerful immune system, physical strength and above-average mental function.

A dose of the new improved Precursor TST provides 50% NRVs* of vitamin B6, Magnesium and Zinc. It has been proven that the combination of these three elements positively increases testosterone in people who perform intense physical activity1. Vitamin B6 contributes to regulate hormonal activity2, and magnesium and zinc play an important role in the synthesis of testosterone: reduced production of this hormone has been attributed to a lack of Zinc3, and magnesium has been shown to increase the presence of biologically active testosterone1.

The fruit of Tribulus terrestris contains saponins such as protodioscin. Studies have connected the presence of this molecule to increases in the levels of testosterone and improvement in sexual activity4.
Among other components, Fenugreek seeds (Trigonella foenum-graecum) contain, flavonoids, alkaloids (Trigonelline), coumarin, carbohydrates and saponins. An increase in free testosterone levels and its bioavailability was observed following consumption8.
The fruit of saw palmetto (Serenoa repens) is rich in fatty acids and has been used for benign hyperplasia of the prostate11 since some of those fatty acids inhibit the 5-alpha-reductase enzyme which is implied in the metabolism of steroids.
The root of Coleus forskohlii contains forskolin, a diterpene that activates the adenylate cyclase enzyme, therefore increasing levels of cyclic AMP13, a molecule that intervenes in different processes and raises testosterone levels when increased14.
Passion flower (Passiflora incarnata) is a plant very well-known for its anxiolytic and relaxing properties. These properties are due to its flavonoid content, which has shown a similar effect to that of benzodiazepines16.
Red clover (Trifolium pratense) is rich in isoflavones, molecules with an oestrogenic activity. The inhibiting effect of the aromatase enzyme has been attributed to the biochanin A isoflavone19.

EXTRACT NAME: Dry extract of saw palmetto standardised to contain 20% in fatty acids
SCIENTIFIC NAME: Serenoa repens (W. Bartram) Small
PART USED: Fruit
PROPERTIES:
•    Potential use for alopecia due to its inhibiting effect on 5-alpha reductase10.
•    Use for fight against the symptoms of benign hyperplasia of the prostate11.

4 capsules per day with half a glass of water at mealtimes.

How long does it take until you notice muscle growth ? And how many tablets should it take?
4 capsules per day with half a glass of water at mealtimes.