For depression and stress 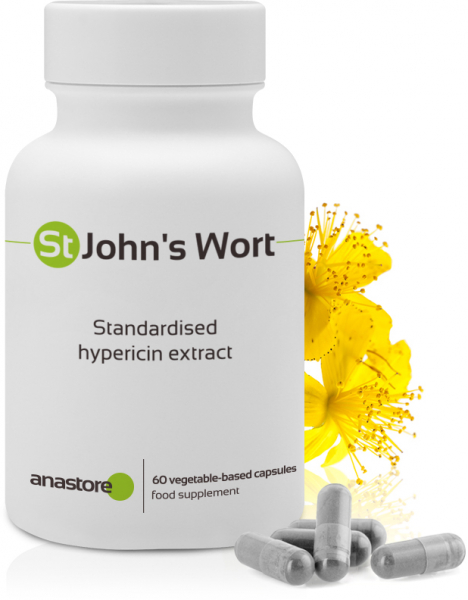 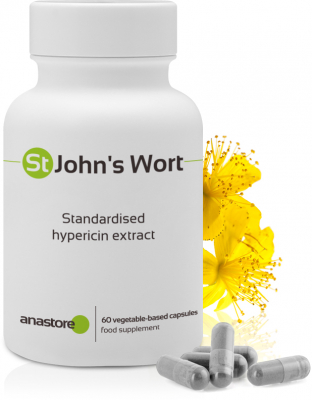 Hypericum, or St. John's Wort, (Hypericum perforatum L.) is a plant that has been used for thousands of years to relieve nervous system disorders and is currently the most widely used plant for mild to moderate depression.

Numerous studies support the use of hypericum for mild to moderate depressive episodes. It also has fewer side effects than synthetic antidepressants.

Hypericum, or St. John’s Wort, (Hypericum perforatum L.) is a perennial herbaceous plant that belongs to the hypericaceae family. Its leaves contain multiple glands visible against the light and its flowers have five golden yellow petals with numerous prominent stamen1 that appear from May to August. It can grow up to one metre tall and mainly branches from the top of the stem; it has a woody, highly branched and fusiform root2.

Hypericum is native to temperate regions of Europe. It can be found in almost all European countries, as far as eastern Russia, and has acclimatised in many parts of the world, such as China, Australia, North Africa and America2.

Hypericum has been used for thousands of years: Hippocrates used this plant as an anti-inflammatory; Dioscorides cited it in his encyclopaedia, as did Galen and Pliny in their works3.

The name hypericum comes from the Greek hyperikon (“over images; over an apparition”), which, according to some, refers to hypericum’s ability to expel evil spirits; while for others the glands of its petals appeared to form images. Perforatum, meanwhile, refers to the fact that if the plant is observed against the light it has a perforated appearance due to the oil glands present in its leaves and sepals2.

In the Middle Ages it was believed that the scent of hypericum drove away evil spirits, and it was hung from roofs to prevent lightning and fire. It was also believed that to obtain these magical properties, it should be harvested in the early morning on St. John’s Day (24 June), the date on which St. John the Baptist was beheaded, which also coincides with the plant’s flowering3.

*Flowering top: the top of a plant when in flower.

Hypericum is often used to relieve the symptoms of mild to moderate depression, since the side effects are fewer than those of synthetic antidepressants, and hypericum, or St. John’s Wort, is one of the most widely used plants. In Germany, for example, prescriptions of hypericum account for 25% all antidepressant prescriptions6.

Finally, hypericum extract is also used to relieve anxiety and sleep disorders8. In vitro studies indicate that hypericum compounds may interact with receptors that mediate anxiolytic effects, such as GABA receptors1.

Inform your doctor or pharmacist if simultaneously taking medication. Not recommended for pregnant or lactating women. Do not exceed the recommended daily dose.

Does not replace a varied and balanced diet and a healthy lifestyle. For adult use only. Keep out of reach of young children.

A natural solution to combat sleep disorders and insomnia