Energy in its purest form 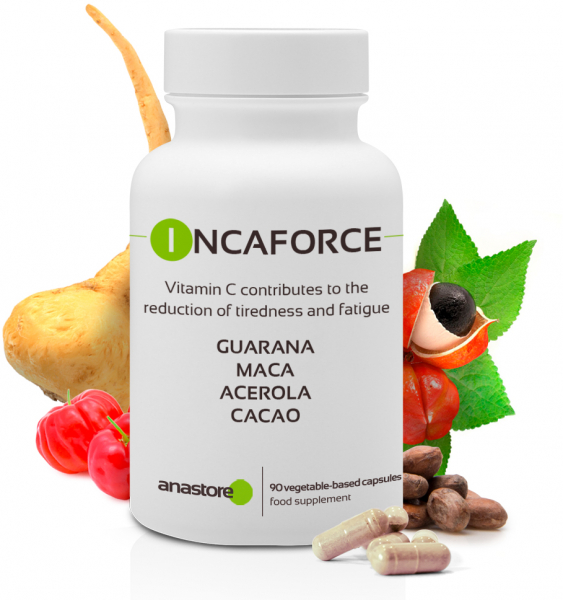 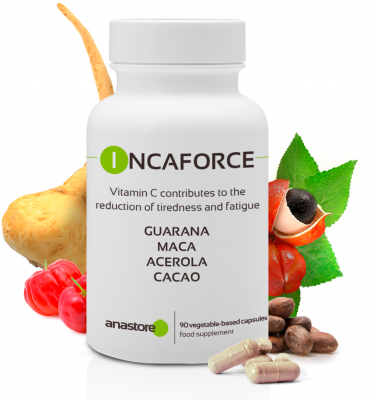 **Cocoapure ® is a registered trademark of Naturex, S.A.

Vitamin C contributes to the reduction of tiredness and fatigue.

Vitamin C contributes to normal functioning of the nervous system.

From the Altiplano on the edges of the Amazon, the phytonutrients in our INCAFORCE formula have brought energy and health to those who consume them.

Native to the Amazon basin, Guarana is a natural source of caffeine. Its properties stimulate attention and memory and help combat fatigue.

The caffeine naturally present in Guarana speeds up the metabolism, aiding weight loss.

Maca has been cultivated in the high plateaux of the Andes for over 3,000 years, at an altitude of over 4,000 m. Its complex adaptogenic properties regulate the effects of stress on the body and boost homeostatic capacity.

Acerola is a small cherry from South America. It has been eaten for a long time by the Amazonian Indians who are aware of its stimulating and protective properties.

Acerola’s high levels of vitamin C help to protect the body against infection and to fight against colds and flu.

Its anti-inflammatory properties are essential for scar healing, skin beauty and helping to relieve headaches.

A symbol of power for the ancient peoples of Central America, the cacao bean is a powerful antioxidant known for its health benefits.

Its high flavonoid content combats cardiovascular diseases by preserving the elasticity of blood vessels, which contributes to healthy blood flow.

INCAFORCE is a synergy of plant extracts used since ancient times by the civilisations of the American continent as a natural and safe way to provide strength and energy to the body.

OUR EXTRACT:
By ingesting guarana extract, the native caffeine is contains progressively releases energy throughout the day, unlike products with added caffeine that simply provide a single burst of energy.

CONTRAINDICATIONS: Not recommended for those who are allergic to caffeine, or for patients suffering from severe cardiovascular disorders, stomach ulcers, epilepsy or insomnia. Not recommended during pregnancy or breastfeeding, or for children under twelve. Do not take at night.

OUR MACA:
Maca, also known as ‘Peruvian ginseng’, is a root from the high plateaux of the Andes known for its effect on sexual desire and libido in both men and women. It is also a powerful adaptogen that works through the hypothalamic-pituitary-adrenal axis and stimulates the body to balance and improve its production of certain substances and its response to stress.
Our Maca extract is cultivated according to farming standards, and is meticulously controlled through laboratory testing. This proof of the highest quality is also the guarantee that our Maca is free from environmental pollutants such as pesticides carried by the wind, heavy metals found in soil, and microbiological organisms that colonise plants after harvest.
Its high nutritional value makes it an ideal food supplement for long-term preservation of the body’s muscle tone.

OUR ACEROLA:
The acerola is a small berry from Latin America that has the characteristic of being one of the few fruits rich in natural vitamin C. It has been consumed for centuries by the indigenous peoples of the Amazon for its stimulant and protective properties.
The vitamin C in our acerola extract is native, and is therefore bioavailable and its standardised content is guaranteed through regular testing.
Vitamin C helps to maintain the healthy function of the immune system during and after strenuous physical exercise. Vitamin C also contributes to normal collagen formation, to ensuring the normal function of the bones and of the immune system and helps to reduce fatigue.

OUR COCOA:
The cacao bean (Theobreoma cacao L.) has been used as an ingredient in food for centuries. The Mayan people, for whom it symbolised physical strength and longevity, consumed it for its relaxant, stimulant and restorative properties.
The health benefits of cocoa are numerous; one of the most striking is its strong antioxidant power, due to the high concentration of polyphenols it contains.
Cocoa extract (Cocoapure®) maintains the natural concentrations of polyphenols and their antioxidant capacity, whose ORAC value is high than those of other cacao bean-derived manufactured products.

Contains caffeine. Not recommended for children, pregnant or lactating women (80 mg caffeine / 3 capsules). Do not exceed the recommended daily dose.

Does not replace a varied and balanced diet and a healthy lifestyle. If you are undergoing medical treatment, seek your therapist's advice. For adult use only. Keep out of reach of children.

The notification of placing on the market of this product has been made under notification number PL 2081/27.