The most effective natural compounds for combating joint pain 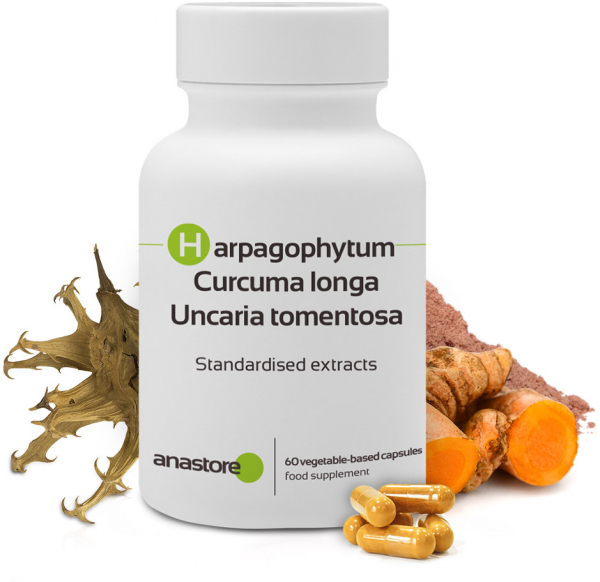 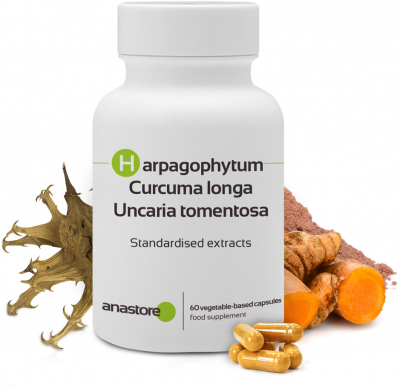 A blend of 3 natural components renowned for their effectiveness in joint pain.

Conditions such as arthritis and back and joint pain due to inflammation or cartilage deterioration are becoming more and more common. If our bones are fragile, we run the risk of fractures, sprains and musculoskeletal problems.

Maintaining a balanced diet and physical exercise are essential to avoid this type of condition. This helps to avoid weakening the immune system, which can cause the tissue damage that allows these illnesses to develop.

Pharmacological treatment of joint problems focuses on three lines of therapy. The first is treatment with nonsteroidal anti-inflammatory drugs (NSAIDS), which reduce inflammation; the second with immunosuppressants to avoid outbreaks or relapses; and the third with selective inhibitors of tumor necrosis factors (TNF), which bring about a reduction in inflammation and pain.

Extracts of harpagophytum, turmeric and cat’s claw have analgesic and anti-inflammatory effects, promote cartilage regeneration and reduce pain. They offer a natural, yet effective alternative to alleviating common joint problems.

Harpagophytum procumbens is a plant native to southern Africa, traditionally used by the indigenous people of the Kalahari Desert for its analgesic and anti-inflammatory properties. It can also be used in case of joint pain.

In our devil's claw extract, standardised to contain 2.5% harpagosides, only the secondary roots of the harpagophytum, which contain a higher concentration of harpagosides than the primary roots, are used. The harpagophytum extract acts as an anti-inflammatory, reducing pain. In studies conducted on this extract it has been shown to inhibit COX-2 and regenerate the extracellular matrix through the formation of glycosaminoglycans, and to stimulate the synthesis of hyaluronic acid, which acts as a lubricant in the joints during slow movements and absorbs elastic shock during rapid movements.

Turmeric is a spice native to Southeast Asia that has a distinctive aroma and intense orange-yellow colour.  It is a plant widely studied for its curcuminoids, which are credited with numerous properties.

Our turmeric extract is standardised to contain 95% curcuminoids, which are the molecules responsible for its antioxidant, anti-inflammatory, cartilage repair and immunomodulatory properties.

Cat’s claw is a plant native to Peru, whose alkaloid-rich bark has been used for over two thousand years as an immunostimulant and anti-inflammatory tonic.

Our cat’s claw bark extract is standardised to contain 3% alkaloids, molecules that have been studied for their immunostimulatory and antiviral action, and their ability to reduce joint pain.

The notification of placing on the market of this product has been made under notification number PL 2081/36.