The power of the mind

Long relegated to so-called ‘alternative’ medicine, meditation will soon occupy an increasingly important place in our therapeutic arsenal, in the same way as diet and physical exercise are key health factors, in the light of the latest evidence obtained by neuroscientists.

In the beginning, meditation was probably born out of contemplation watching the first fires lit by humankind. Protective fires against wild animals, warming fires, fires for cooking food and fire contemplated while sitting around the hearth triggered the first questions about our existence.

Throughout the history of humankind, humans have understood that matter was not the whole picture and that body and mind were inextricably linked.

Of course, no spoon is going to be bent by sheer power of thought, but we can do better than that by not only improving mental well-being but also physical health.

How? We already know the widely discussed aggravating causes, such as an unhealthy lifestyle and environmental pollutants. There is now a broad consensus that these are the main reasons for deterioration in our health.

Meditation is even more beneficial when practised in a natural environment such as in mountains, the countryside, forests or beaches. Here, contemplation and perceptions of the environment are more pronounced: smells, noises, winds. We become one with the elements, and all our senses are awakened. In urban areas, practise meditation at home in a tranquil space, and try to practise outside as often as you can, meditating longer than usual.

The latest neuroscientific studies on the subject have stunned researchers around the world. The statistics are clear: meditation does have a preventive and curative effect on certain conditions. Although there are of course no claims that it can cure terminal cancer, very significant improvements have been established.

This is not news to Tibetan Buddhists. For them, meditation is part of their daily lives. They don’t separate the material being from the mind, and no diagnosis is made without first studying the patient’s psyche.

Finally, we see that progress in conventional medicine and the ancient knowledge built up by peoples in total symbiosis with their environment and their intuitive knowledge of the forces of the mind can coexist constructively and positively.

The meditation technique referred to here and which is the subject of experimental research, called ‘mindfulness meditation’, is a meditation technique inspired by Tibetan meditators. The principle is being aware of the present moment and all the internal and external sensations you experience.

During meditation, thoughts and sensations come and go gradually and naturally. They should not be interpreted, and past or future events should not be focused on, only the present moment.

Mindfulness should not be confused with religion; it does, however, ask the same questions about the meaning and mysteries of life. Neither is it a relaxation exercise: it require personal investment before the full benefits are felt.

Practical tips: how to meditate 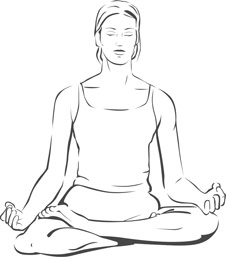 To begin meditation, find a tranquil location and sit in a comfortable position. The most typical position is sitting on the floor, barefoot, cross-legged. This is the lotus position. It can be difficult to attain. You may prefer the half-lotus position. The chest is straight, the head tilted slightly downwards and arms loosely outstretched, resting on the knees, palms facing down. In the Buddhist tradition, the hands, or ‘mudrās’, are positioned in meditation in order to experience other sensations, for example the palms facing the sky, called cosmic mudrās. (see sketch)

The lotus (or half-lotus) position is particularly recommended, but meditation can also be practised seated on a chair or armchair. For people confined to bed, it can be practised lying down. Some very experienced meditators can even meditate while standing or walking.

Meditation is even more beneficial when practised in a natural environment such as in mountains, the countryside, forests or beaches. Here, contemplation and perceptions of the environment are more pronounced: smells, noises, winds. We become one with the elements, and all our senses are awakened. In urban areas, practise meditation at home in a tranquil space, and try to practise outside as often as you can, meditating longer than usual.

When ready, close your eyes and start to become aware of your own breathing by controlling the first inhalations and exhalations. Let thoughts arrive without forcing them, without analysing them; just concentrate on the present moment. You experience external and internal stimuli, but you remain neutral, making no judgement about them. They come and go. Gradually, you become detached from occurrences, becoming merely an observer. The duration of the meditations that were studied was 20 minutes every day, but this is never a dogma. Adapt meditation to suit your circumstances and needs.

The power of the mind on the body

The mechanisms that allow the brain to react to the stimuli of meditation are very complex and there are still processes that are not fully understood. In general, meditation can be said to reconfigure the cerebral cortex. The main conditions responsive to meditation include stress (due to strengthening the immune system’s defences) and cell ageing, a factor in several illnesses, such as chronic inflammatory processes.

What is fascinating is that scientists have now been able to see the forces of the mind on their screens using brain imaging techniques and biochemical analysis. They have been able to identify the stimuli exerted by meditation on certain areas of the brain. Meditation therefore produces its own analgesics.

Practised since antiquity and reaching its peak in Tibetan Buddhism, meditation still offers new horizons for the development of the self and the tremendous healing powers of the mind.

Of all our senses, our sense of smell has the greatest influence on our emotional perceptions. It is also our earliest sense: from the 7th week of gestation, a foetus’s olfactory cells establish connections with the brain. At birth, the infant perceives the smell of his mother and of his mother's milk, forming his earliest experiences and first contacts with his mother.

The brain possesses as many ‘locks’ as there are odorant molecule ‘keys’. It is able to distinguish betwen thousands of different smells. Amazingly, our brain possesses all the specific receptors of these smells from conception. They influence our emotional states, they condition us to tell us what is good for us: forest smells, sea spray, fruits. The brain also alerts us to smells perceived as bad. Wholly natural scents are effective accompaniments to meditation sessions.

In almost all civilisations that practice meditation and spiritual rituals, scent, mainly diffused as incense, plays a prominent role. Originally, perfume – from the Latin per fumum (‘through smoke’) – was a sacred practice: human beings could not communicate with the Gods without being accompanied by clouds of fragrant smoke. Many aromatic plants have a real effect on the mind, sometimes stimulating, sometimes soothing.

In my work formulating perfumes using only natural essential oils, every time I used sandalwood at my perfume organ I immediately noticed that this smell was having profound effect on my mind. It brought me emotional well-being almost instantly! Few scents have such a powerful effect as sandalwood. In Buddhism, it plays a prominent role; the scent would transform desires and hold the attention of people practising meditation. Other plants have just as remarkable properties, for example agarwood and its mystical scents; incense resin, the source of the very first perfumes in history; patchouli, whose fermented leaves evoke hints of undergrowth and sensuality; and the zests and leaves of a variety of citrus fruits with fresh, warm scents.