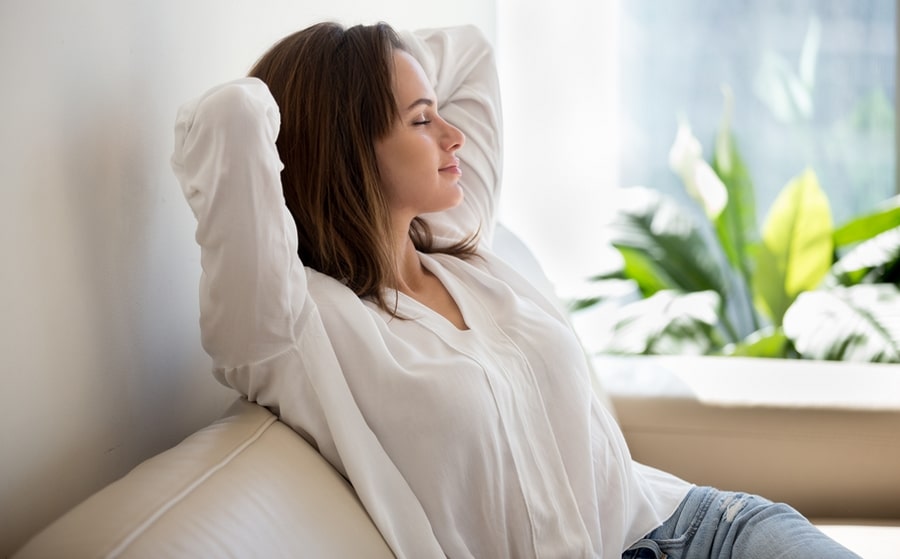 On the tireless path to happiness, human beings can sometimes feel sad and low. On certain days, symptoms of anxiety and mild depression may even be detected as a result of a stressful situation they cannot control or manage. This has a negative impact on mood, on rest and on personal and professional relationships.  But there is a solution. Griffonia simplicifolia, a plant native to Africa, is a natural way of coping with these and other situations, by helping to maintain adequate levels of serotonin, the so-called ‘happiness hormone’.

In search of happiness

Serotonin (5-hydroxytryptamine) is a neurotransmitter, a ‘brain messenger’ made endogenously from the amino acid tryptophan (found in protein-rich foods). This important neurotransmitter plays a vital role in regulating the central nervous system and is involved in different aspects of behaviour and mood. Serotonin is able to regulate appetite, pain threshold, sleep, states of anxiety, panic and depression, as well as aggression and sexual behaviours (1) (2) (3).

Having the right levels of serotonin will give you the key to happiness.

How can I obtain the right levels of serotonin?

Serotonin, along with dopamine and adrenaline, are called ‘monoaminergic’ neurotransmitters. The term alludes to the fact that the body can produce these neurotransmitters from a single amino acid. The raw material required for the synthesis of serotonin in the brain is the amino acid L-tryptophan (4). Although serotonin is also produced by cells outside the brain, serotonin cannot cross the blood-brain barrier, so all of the serotonin used by your brain has to be produced in situ by neurons. But the effect of serotonin on brain functions such as attention, motivation and emotion is only temporary (5). So precursors of serotonin must be delivered through the bloodstream in a constant and sustained manner. In other words, we cannot afford to let the ‘raw material’ run out, as this would lower levels of the happiness hormone.

That’s why drugs prescribed as antidepressants are given long-term, in order to maintain adequate levels of serotonin. These synthetic chemicals are actually described as selective serotonin reuptake inhibitors, which means that they prolong the time that serotonin remains in the synaptic cleft exerting its functions, but the signal eventually switches off. This coupled with the sheer number of side effects triggered by these antidepressant drugs and their addictive effects mean that they only act temporarily (6). It therefore makes sense to look for natural solutions that do not present these side effects.

The long road from tryptophan to serotonin

Tryptophan is an essential amino acid. This definition, however, suggests deficiency from the outset. In nutrition, ‘essential’ means that the human body is not able to manufacture it endogenously, despite needing it on a daily basis. The only option left for so-called essential nutrients is daily intake through diet or supplementation. Food sources of tryptophan are meat, dairy products, eggs, soya and wholegrain cereals (7).

So at first glance, it seems that it is easy to obtain serotonin with the proper intake of dietary tryptophan, but the reality is much more complex.

The second obstacle tryptophan encounters on its path to brain tissue is that this amino acid is also required by other tissues in the body for protein synthesis and vitamin B3 (niacin) synthesis. In other words, all the tryptophan ingested through diet is not used only for the synthesis of serotonin in the brain, some of it will take other metabolic pathways.
The third obstacle we encounter are all the intermediate steps to obtaining serotonin in the brain. Tryptophan is first transformed into 5-HTP and then into serotonin. In turn, serotonin becomes the molecule N-acetylserotonin, precursor of melatonin (the hormone that regulates sleep-wake cycles).

Studies have therefore demonstrated that for serotonin synthesis, the use of the intermediate metabolite 5-HTP (5-hydroxytryptophan) (8) (9) could be more effective because, as a direct precursor of serotonin it offers a number of advantages. 5-HTP reaches the brain more easily than tryptophan, since it is capable of crossing the blood-brain barrier without competition for uptake. In addition, this metabolite is not required, unlike with tryptophan, for the synthesis of vitamin B3 or proteins (10).

So the question is, where do you get 5-HTP directly?

Ancient African medicine has given us one of the best natural sources of 5-HTP, Griffonia (Griffonia simplicifolia). Although in Africa several parts of this plant have traditionally been used to help heal wounds, for renal disorders or as an aphrodisiac (11) (12), in the West the focus is on its seeds, probably because in this part of the world we are scourged by disorders such as anxiety, depression, insomnia and compulsions and addictions, for which griffonia seeds have demonstrated great therapeutic value.

This interest lies in the fact that griffonia seeds are typically rich in 5-HTP (13), which, as mentioned above, acts as a direct precursor of serotonin, making it a promising plant with anti-stress benefits, and a natural anxiolytic (14).

Griffonia seeds have shown positive effects in situations that affect mood or sleep quality. Doses of between 50 and 200 mg of 5-HTP per day (so it is essential that extracts of this plant are standardised) are evidenced as useful in a variety of disorders of the human nervous system (15) (16). These include depression, fibromyalgia, headache, obesity, appetite control, insomnia, and even romantic stress (e.g. after a break up) (17) (18) (19) (20) (21).

It is just as important to be emotionally as well as physically healthy, and this is where Griffonia simplicifolia acts as a natural antidepressant, helping to balance emotions and mood (22). Being rich in 5-HTP makes it possible to reclaim control and regain calm, sleep quality and a positive attitude, while helping to reduce body weight by controlling food drives (23) (24) (25).

All of this is done the natural way, without affecting the normal functioning of the brain, without creating dependence, unlike synthetic antidepressants, and all thanks to a plant, which in this specific case must have standardised 5-HTP (the main active principle) content to achieve the doses used in the reference studies.

PLEASE NOTE: Griffonia seed extracts are intended for adult use only. In addition, they should not be taken at the same time as serotonin reuptake inhibitor antidepressant drugs or monoamine oxidase enzyme inhibitors (MAOIs). If you are taking medication and have a specific medical condition, consult your doctor beforehand.

We use cookies to improve your shopping experience and to customise adverts linked to your preferences. We also share information with our social media, advertising and web analytics partners about how you use the website. Configure cookies