Cordyceps, an adaptogenic fungus to increase physical and sporting energy

Used in Asia for centuries, Cordyceps sinensis is a fungus with extraordinary adaptogenic properties, capable of supplying energy and vitality to cope with situations of physical and mental stress.

In Tibet, China and other Asian countries, mushrooms have been prized since ancient times for their nutritional and medicinal properties. Thanks to their complex and complete nutritional and biochemical composition (they provide vitamins, minerals, amino acids, polysaccharides, sterols, nucleotides etc.), medicinal mushrooms stand out for their invigorating, immunomodulatory, anti-inflammatory, anti-tumour and hepato-protective action, and as natural regulators of cholesterol, glucose and blood pressure levels (1) (2).

The curious history and biological cycle of Cordyceps sinensis, a mushroom native to the Tibetan plateau, full of symbolism and considered a true panacea for its multiple nutritional and therapeutic properties, is a remarkable story (3).

The way in which Cordyceps fungus (Ophiocordyceps sinensis or Cordyceps sinensis) grows and develops sounds straight out of a horror novel. This parasite is not content to live at the expense of another species, animal or vegetable, as other natural parasites do, with little damage to the host; it actually destroys the unfortunate host and, while it is disorientated and in agony, forces it to seek out the best conditions for its own growth. Its preferred victims are moth larvae of the Hepiaideae species (4).

Cordyceps reproduce through spores that land on the skin of their victims. These spores penetrate the body of the moth larva, colonising them until they reach the head, where their growth and development will begin. Once the growth cycle is complete, it will explode to spread its spores again and look for new victims on which to develop. A story that sends shivers down your spine, in which the fungus germinates inside a living host, kills and mummifies the larva and then grows out of the victim’s head (5).

From the Tibetan Steppe to the West

Traditional use of this fungal species dates back to ancient times, and reference to its properties has been found in Chinese medicine and traditional Tibetan medicine. Known as ‘Tibetan viagra’, its initial discovery came when local shepherds who observed how their cattle improved their vitality and reproductive capacity by consuming Cordyceps. As a result of these findings, the fungus began to be collected and dried in the sun as primary processing, for consumption by the local people convinced that it increased their energy, sexual potency and desire (6).

Contemporary science has found numerous bioactive components responsible for its multiple properties, now supported by clinical studies and not only by its traditional use, which has aroused the West’s interest in and consumption of products made from extracts of this medicinal mushroom. Its main components include cordycepin, cordycepic acid, adenosine, mannitol, ergosterol and polysaccharides (7) (8) and, according to studies, the main pharmacological actions of these components are their adaptogenic, anti-inflammatory, antioxidant, anti-diabetic, lipid-lowering, immunomodulatory, anti-tumour and nephroprotective effects (9) (10) (11).

One of the studied properties of the Cordyceps fungus is its adaptogenic action. The term ‘adaptogen’ describes a substance that improves the body’s state of non-specific resistance to situations of physical and mental stress (12). Studies demonstrate its anti-fatigue and anti-stress capacity (13) and a boost in endurance during exercise (14) (15).

The stimulating effect of C. sinensis has also been linked to its ability to increase testosterone production (16), increase glycogen storage, as well as promote the use of glucose and lactate for energy gains, and delay acidosis in muscles (17). Not forgetting that C. sinensis helps to eliminate excess free radicals generated during oxidative metabolism and protects cells from premature ageing (18) (19). It also improves vasodilation, resulting in improved oxygen supply and lung capacity (20) (21), aids control of glucose and blood lipids (22) and improves sexual performance and libido in both sexes (23).

It is not surprising, considering that this adaptogenic fungus grows in extreme conditions, such as altitudes above 3,000 metres, to which it must adapt in order to survive (24), and the fact that in Traditional Chinese Medicine it is considered a natural invigorating remedy for the body, revered as Yin-nourishing and Yang-invigorating, helping to generate mitochondrial ATP (cellular energy) (25).

With so much scientific evidence, from traditional use to the latest research areas, this appears to be a promising natural solution capable of improving the quality of life of many people.

Given its specific geographical location at high altitudes and the way it reproduces, it is not surprising that this ‘caterpillar fungus’ has limited natural specimens, unable to cope with the high demand for nutritional supplements made from its dry extract. The price of Cordyceps has been increasing in recent years due to growing global demand, which has led scientists to seek artificial cultivation methods to make this traditional medicinal mushroom a more affordable commodity for sale (26). However, due to different species of mushrooms and different fermentation processes, there was a proliferation of fermented products during the 1980s and 1990s, with significant differences in quality, and this had a direct impact on their clinical application (27).

But nowadays, after several decades of efforts and attempts, the artificial cultivation of high quality Cordyceps sinensis has been achieved. Greater understanding of the biology of the fungus, its host insect and simulation of the Tibetan alpine environment has resulted in successful large-scale artificial cultivation with annual yields of 2.5, 5 and 10 tonnes in 2014, 2015 and 2016 respectively. But the most interesting thing is that, according to the studies, there was no difference in the chemical components detected between cultivated and natural Chinese cordyceps, which would derive the same therapeutic properties. In addition, the artificial cultivation system can be controlled, which can potentially avoid any contamination of heavy metals and obtain high quality products (28). This artificial cultivation therefore helps to alleviate the pressure of human demand, while protecting limited natural resources for sustainable use. 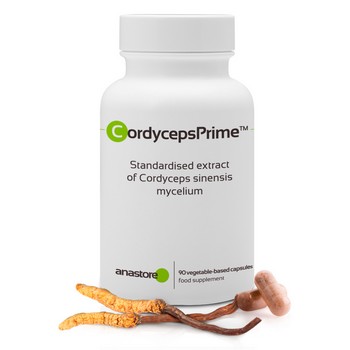 Through a biotechnological cultivation and fermentation process, we obtained Anastore’s CordycepsPrime™, a clinically tested extract of mycelium (the vegetative body of the fungus) from Cordyceps sinensis. The Cordyceps strain used to obtain this extract (the CS-4 strain) has been the subject of multiple studies that back its effectiveness, thanks to its active components such as adenosine, polysaccharides and mannitol (29) (30), which are standardised in this product to contain 0.28% adenosine and 8% D-mannitol (cordycepic acid), guaranteeing its effectiveness in helping to reduce both physical and mental fatigue and maintaining all its energy and vitality.

To buy cordyceps titrated at 0.28% adenosine and 8% D-mannitol, click here.

PLEASE NOTE: Not recommended for use in children, pregnant or nursing women. Due to its hypoglycaemic and cholesterol-lowering properties, consult your doctor beforehand if you are also taking medication, as the effects can be synergistic.

(12) Effects of Adaptogens on the Central Nervous System and the Molecular Mechanisms Associated with Their Stress—Protective Activity Alexander Panossian* and Georg Wikman https://www.ncbi.nlm.nih.gov/pmc/articles/PMC3991026/

(28) A breakthrough in the artificial cultivation of Chinese cordyceps on a large-scale and its impact on science, the economy, and industry.
Li X, Liu Q, Li W, Li Q, Qian Z, Liu X, Dong C. https://www.ncbi.nlm.nih.gov/pubmed/30394122

Coffee is one of the most widely consumed beverages in the world. Each place, each country and each culture has different tea consumption habits and traditions. It is well known as a caffeine-rich beverage. Caffeine is the substance that gives it its stimulant properties and contributes to its bitter taste.