Nopal, the cactus that captures fat and sugar

It is estimated that thousands of years ago, when the first settlers arrived in the Mexican basin, they found several types of cactus, including the Nopal, and that the Mayans of south-eastern Mexico fed on its fruits and shoots. History has it that it arrived in Europe with Columbus’s first return journey to Lisbon in 1493, and that its succulent fruits delighted 15th-century Europeans (3)(4).

Today the fruit of the nopal, or prickly pear (Opuntia ficus-indica), continues to be a treat for the palate, as well as an important source of nutrients. Nopal is rich in dietary fibre, vitamin C, calcium, betalain and polyphenols with antioxidant action (5), and is used in traditional cooking as food, for making juices or as a raw material in the manufacture of food supplements (6).

From traditional medicine to the present day

The Opuntia ficus-indica species currently grows not only in Mexico but also in semi-arid climates in  Latin America, South Africa and in Mediterranean countries, where it is used as a herbal remedy for various conditions thanks to its antioxidant, anti-inflammatory, hypoglycaemic and lipid-lowering effects (9).

Nopal, a natural blocker of sugar and fats

Current studies show how Nopal can control and reduce blood glucose levels in healthy people and in people with type 2 diabetes (10)(11). This supports the traditional use of this plant for blood glucose management and demonstrates its potential as a blood glucose control supplement (12).

Research suggests that the high fibre content of Nopal (mucilages, pectins, hemicelluloses) (13) may be partly responsible for its beneficial effect on blood glucose and cholesterol levels by reducing their passage into the bloodstream through partial inhibition of absorption (14)(15). This could explain its hypolipidemic effect.

One study found that a supplement of dry extract of Opuntia ficus-indica increased HDL cholesterol, with a decrease in LDL and triglycerides in women with metabolic syndrome (16), while another animal model study observed a decrease in triglycerides and diastolic blood pressure (17).

Losing weight is no easy task; millions of people around the world are looking for natural solutions to support their diet and exercise plans in order to achieve better results. Obesity has already been declared an epidemic by the World Health Organization (18) and evidence shows that excess weight is associated with an increased risk of type 2 diabetes, hyperlipaemia, cardiovascular disease and certain types of cancer (19)(20). So this natural aid offered by Nopal is invaluable.

The fibre naturally present in Nopal can be a great ally since it exhibits beneficial properties such as an increase of the feeling of fullness and support in reducing body weight by binding to dietary fat and increasing its excretion, creating a complex that cannot be digested or absorbed and is therefore eliminated (21)(22)(23). Simply put, if a meal rich in fat is ingested, part of this nutrient would bind to nopal fibre to form an insoluble complex. This is eliminated without being absorbed and therefore the calories of that fat ‘do not count’ (are not added). This translates into a reduction in calorie (energy) absorption and consequent weight loss, as part of a balanced diet.

Other lines of preliminary research suggest that the possible prebiotic, antioxidant, and anti-inflammatory effect of nopal is particularly interesting for weight control and associated risk factors (24)(25), and evidence points to microbiota being involved in the control of low-grade inflammation associated with obesity (26). Although science always demands more conclusive studies, it seems that Nopal, thanks to its fibre, polyphenols, vitamins and minerals, can be beneficial in weight loss and in the control of cardiovascular risk parameters. 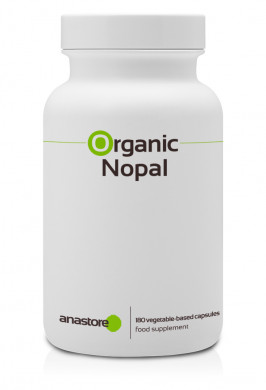 All these benefits, based on scientific evidence, have led Anastore to develop a food supplement from organic cactus to guarantee the highest quality of raw material, and also guarantees a minimum 40% fibre content. These substances naturally present in Nopal help to capture fats and sugars, meaning this supplement may be a good option for people with type 2 diabetes and/or hypercholesterolaemia. Also effective at partially blocking the passage of these caloric nutrients into the blood and controlling appetite, this supplement can contribute to weight loss. Taking two capsules per day of Anastore’s organic Nopal is recommended, ideally before main meals for most effect. Never forget the importance of a balanced diet and a healthy lifestyle that includes regular exercise.
‘Eating cactus’ and its derived products, such as Anastore’s dry extract of organic Nopal leaves (Opuntia ficus-indica (L.) Mill.), has never been so easy, natural and healthy.

This product is recommended only for adults, and is not suitable during pregnancy or breastfeeding. If you have a specific medical condition, or if you are taking medication, consult your doctor beforehand.

How to use Konjac glucomannan for weight loss

Glucomannan is a natural fibre extracted from konjac, a tuber traditionally grown in China and Japan whose root is almost 100% fibre. This food supplement has the benefit of helping to reduce weight because, when ingested mixed with water, it increases in volume in the stomach.

Garcinia Cambogia, the Superfood that will help you lose weight

With summer on its way, it’s time to “check the scales”. Medicinal plants can be an invaluable tool to ensure your efforts see faster and better results. Today it’s the turn of one of the plants most frequently used as a weight loss aid, Garcinia cambogia.

When man was strong and healthy

After studying the principles of the paleolithic diet, Anastore has developed an ideal snack for maintaining vitality between meals: CRO® bars, which only contain fruits – ­dried fruits and red fruits – with no preservatives or artificial flavours.