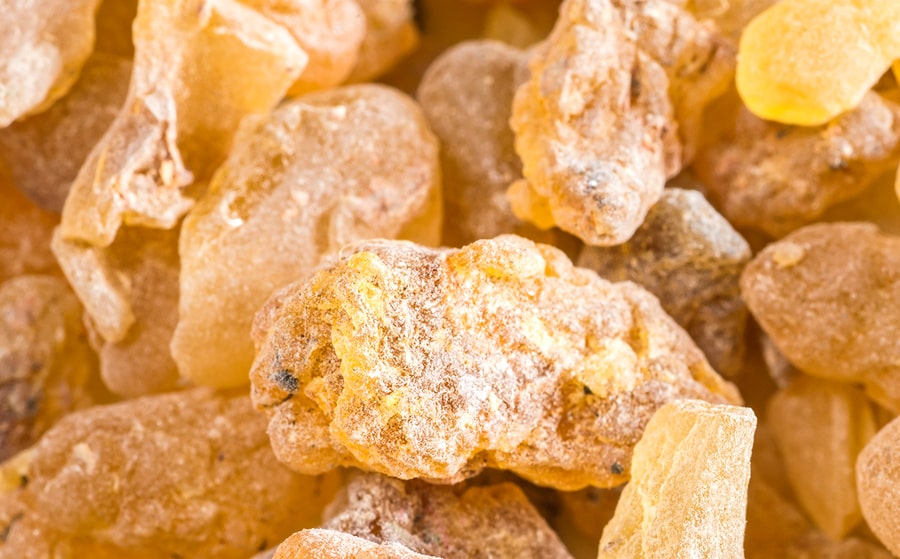 Boswellia serrata (incense) is a moderate to large tree found in India, North Africa and the Middle East. Boswellia bark peels off, producing an oleo gum-resin. The extract of this exudate gum has been traditionally used in Ayurvedic medicine as an anti-arthritic, astringent, stimulant, expectorant and antiseptic (1).

In addition to its use in Ayurvedic medicine, Boswellia has also been used in religion, cosmetics and perfumery. Like other incense species, Boswellia serrata is an important source of boswellic acid (BA), its active component, which is commonly used in the pharmaceutical industry due to its anti-inflammatory properties (2).

Composition and functioning of Boswellia serrata

Boswellia serrata gum-resin contains up to 12 different types of boswellic acids, but these the six main acids identified as responsible for inhibiting the enzymes involved in inflammation (3) include:

The anti-inflammatory actions of the ABs are caused by different mechanisms of action. These include the inhibition of leukotriene synthesis and, to a lesser extent, the synthesis of prostaglandins, in addition to the inhibition of the complement system, a fundamental component of the defensive immune response to a hostile agent. An important target of ABs is the immune system.
ABs including KBA and AKBA have been proven to decrease the production of pro-inflammatory cytokines that are directed to destroy tissues such as cartilage, insulin-producing cells and bronchial and intestinal tissue (4).

This is why Boswellia extract is used for treating many inflammatory diseases such as osteoarthritis, inflammatory bowel disease and asthma.

Joint problems can significantly limit day-to-day life activities and lead to chronic pain. Osteoarthrosis is a very frequent pathology that emerges when the cartilage covering the joints has worn out, making movement difficult to the point where the area begins to swell and generate pain. It is estimated that almost 50% of the population will suffer from symptomatic osteoarthritis during their lifetime (5).

Recently, a double-blind, placebo-controlled study (6) was conducted in patients with osteoarthritis of the knee who took a standardised oral supplement of Boswellia serrata (EBS) extract. A total of 48 patients with osteoarthritis (OA) of the knee were randomly assigned to an EBS group (2 capsules of 169.33 mg, with an average value of 87.3 mg β-boswelic acids per capsule; 174.6 mg of β‐boswelic acid per day), or a placebo group for the intervention over a period of 120 days. The results of the study revealed that the group treated with Boswellia serrata extract saw a significant improvement in the physical function in the patients, reducing pain and stiffness, in comparison to the placebo. EBS also significantly reduced serum levels of highly sensitive C-reactive protein, a possible inflammatory marker associated with osteoarthritis of the knee.

A meta-analysis published in 2018 (7), in which four clinical trials comparing Boswellia formulations were identified and analysed against the placebo (N = 216), found that patients receiving Boswellia formulations experienced a greater reduction in pain, and improved knee function in comparison to those receiving the placebo, while experiencing no significant side effects.

Boswellia supports the health of the gastrointestinal tract

Gastrointestinal illnesses are a broad group of pathologies that include inflammatory bowel diseases, the main ones being Crohn’s disease and ulcerative colitis. Both have a major impact on the quality of life of people who suffer from them, and it is estimated that these illnesses occur in approximately 0.3% of the population in North America, Oceania, and many countries in Europe (8).

A double-blind, randomised clinical trial, in which 31 patients with collagenous colitis were randomised to receive 400 mg of oral Boswellia serrata extract or a placebo three times a day over 6 weeks, found that after the treatment the proportion of patients in clinical remission was higher in the EB group than in the placebo group. (9).

Another clinical trial focusing on a chronic inflammatory diseases such as ulcerative colitis included a group of grade II and III patients, to test the effect of an extract of Boswellia serrata resin (350 mg three times a day over 6 weeks) compared with a control group of patients who received sulfasalazine (1 g three times a day; sulfasalazine is a drug used to treat ulcerative colitis). Post-treatment variations in stool properties, histopathological and microscopic studies of rectal biopsies and blood parameters such as haemoglobin, serum iron, calcium, phosphorus, total leukocytes, and eosinophils were compared. All parameters tested improved after treatment with Boswellia serrata gum-resin: 82% of patients treated went into remission. For the sulfasalazine group, the remission rate was 75% (10).

Another inflammatory bowel disease is Crohn’s disease. In a randomised, double-blind, controlled parallel group clinical trial, 44 patients were treated with Boswellia serrata extract, while 39 patients were treated with mesalazine (mesalazine is a drug with characteristic anti-inflammatory properties, widely used in inflammatory bowel processes). As a measure of primary outcome, the change in Crohn’s disease activity index (CDAI) between the initial state and end of the therapy was chosen. The study confirmed that therapy with Boswellia serrata extract is not inferior to mesalazine (the efficacy of mesalazine for this indication has been approved by the health authorities) (11).

In France, asthma is a common illness that affects around 10% of the population aged between 18 and 44. It most frequently emerges in childhood, and although in most children the illness recedes in early adolescence, in about 33% of cases asthma into adulthood. Less frequently, the illness begins for the first time in adulthood (12).

The benefit of Boswellia serrata extract in bronchial asthma has been studied. In a double-blind randomised clinical trial, a first group of 40 patients were administered 300 mg of the extract three times a day over 6 weeks, while another placebo group of 40 patients received 300 mg of lactose over 6 weeks. The results showed that 70% (Boswellia extract group) vs 27% (placebo group) showed an improvement in the disease, manifested in the disappearance of symptoms and physical signs such as dyspnea, rhonchi, number of attacks, increase in the subset of FEV1*, FVC** and PEFR***, and a decrease in the eosinophil count (13)
Taking into account the good results obtained after taking Boswellia serrata extract in several inflammatory pathologies, together with data that supports the safety of consuming it daily, Boswellia serrata is a great food supplement for reducing symptoms in this type of pathology.

In a double-blind, placebo-controlled trial in 48 patients to evaluate the safety and efficacy of a new extract of Boswellia serrata (5), their vital signs, namely blood pressure, respiratory rate, pulse rate and any abnormal laboratory/diagnostic parameters recorded were safe, and therefore confirm the safety of Boswellia serrata extract.

During the study, no serious adverse events were reported. No clinically significant abnormal laboratory values were identified, and no statistically significant changes in vital signs were observed from baseline to the final visits.

Anastore has developed a 100% natural product that has been incorporated into plant-based capsules, offering a genuinely healthy product.

It is a highly concentrated dry extract of Boswellia gum-resin, with a boswellic acid content of 80%, to provide a daily dose similar to or even higher than that used in studies where use was shown to be effective for various inflammatory diseases.

The product also contains no BPA, and has been manufactured with complete safety in mind.