On 6 August 1945, an atomic bomb was used as a weapon for the first time and exploded over Hiroshima. The Japanese city experienced a temperature equivalent to 40 times that of the sun and 140,000 people lost their lives.

However, about one year later, a Ginkgo biloba L. was found to be naturally germinating in the ruins of an ancient Buddhist temple very close to the point of impact (1).

The last remaining representative of its ginkgoaceae family, ginkgo has been found in fossil records dating from the Jurassic era (2) and can live up to 1,500 years (1). It has a DNA 3.5 times longer than that of humans, containing more than 40,000 genes, a formidable armour acquired over the centuries (3). Studies have shown that not only was it particularly resistant to attack by microbes and viruses, and to the absence of light and nutrients, it can also activate an alert system that attracts the enemies of its enemies to defend itself! (1)

Used for centuries in traditional Asian medicine, it comes as no surprise that one of the main therapeutic properties of this symbol of longevity is its ability to preserve cognitive functions such as memory.

Known as the ‘tree of 40 ecus’, because of the high sum paid by a French botanist for just five specimens (4), ginkgo has been planted for centuries in the pagoda gardens of China and Japan (5). It was only introduced in Europe in the 17th Century by the German botanist Engelbert Kaempfer, who travelled with the Dutch East India Company (5).

The world’s major capitals from then on had a specimen of this tree that can grow up to 40 m tall. Its deciduous leaves are unique; they have two fan-shaped lobes (2), whose autumnal yellow colour inspired the famous German poet Goethe (5).

Several studies carried out on ginkgo biloba leaf extracts have found that only those standardised to contain 24% flavonol glycosides and 6% terpene lactones are effective. Tested for the treatment of various neurological disorders, positive results have been observed for the treatment of dementia (7) and Parkinson’s and Alzheimer’s disease (8,9). Ginkgo extracts helps to inhibit dopamine-degrading enzyme (8) and improves cognitive abilities such as concentration and memory (7,9).

The European Commission and the World Health Organization have recognised the effectiveness of this standardised extract as an adjuvant treatment for symptoms of vascular and degenerative dementia, including memory loss, attention disorders and depression.

Our ginkgo a 100% natural, effective extract 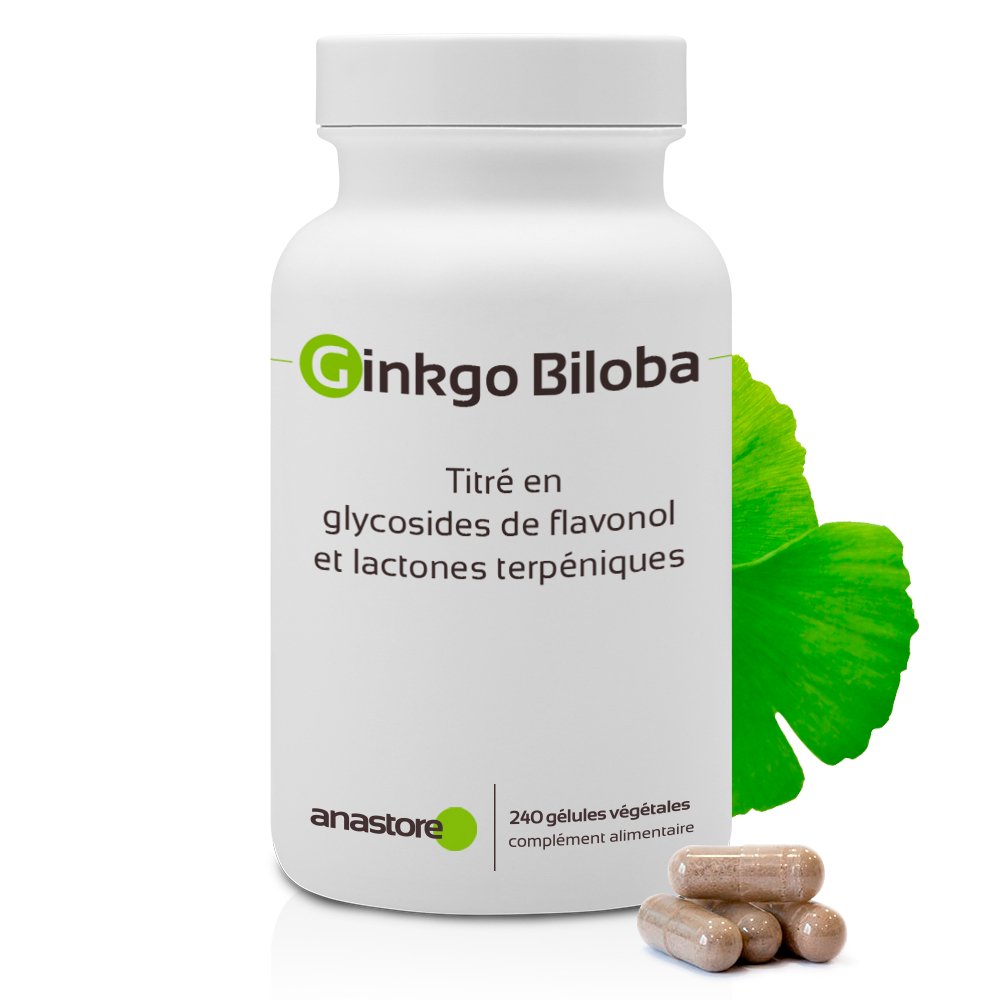 We have developed a standardised extract of ginkgo biloba by following the standardised content recommended by major health organisations, i.e. 24% flavonol glycosides, and 6% terpene lactones.

It is only by keeping to these percentages that the effectiveness of the treatment is guaranteed, and the market often offers only non-standardised pale imitations of terpene lactones or capsules containing only leaf powders with random active ingredient content.

In the interests of transparency, Anastore makes testing certificates for each of its dietary supplements available to view online, including that of our ginkgo biloba extract.

Bacopa, the plant that improves your memory

Bacopa has the effect of helping with attention span and memory, making this plant an ally for those studying or preparing for exams or qualifications.