The hypericum (Hypericum perforatum) plant is native to Europe and widespread in America and Australia. It grows wild on roadside verges in dry, sunny environments.

Hypericum is also called St John’s Wort, a name that emerged in the Middle Ages referring to 24th June, the best day for harvesting the plant, and the day of the feast of St John the Baptist. Around this date, the plant has its highest concentration of active principles. The plant begins to flower in May with golden yellow flowers with prominent black dots around their edges that contain essential oil, a feature that gives it its name perforatum1, 2.

St John’s Wort has been used since ancient times as a natural remedy for relieving depression and other ailments.

What does hypericum contain?

The chemical composition of St. John’s Wort is well known from various research studies. The composition of hypericum includes components such as hypericin and flavonoids, natural pigments present in plants and which protect the body from the damage caused by oxidising agents. Its chemical composition also includes essential oil, phenolic acids and carotenoids and a high proportion of condensed tannins with astringent and anti-inflammatory properties3. 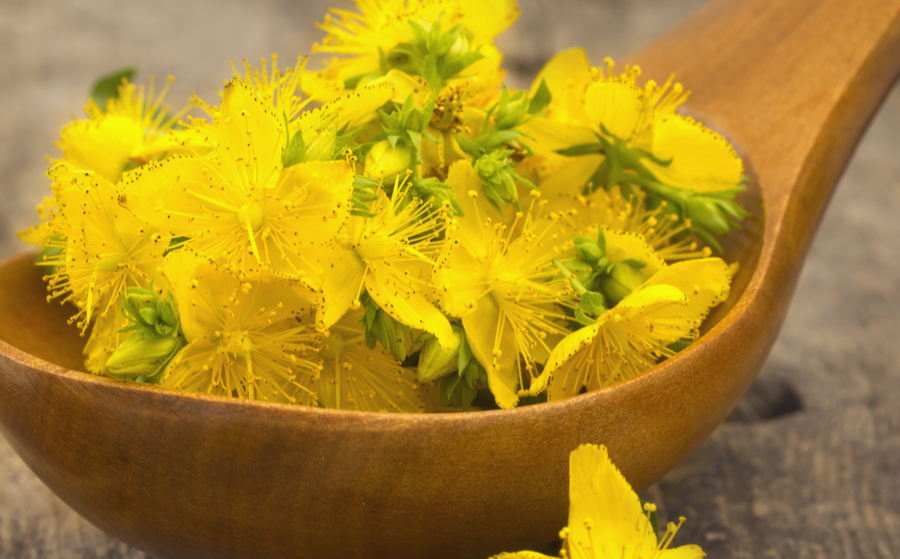 Hypericum perforatum is one of the oldest and most widely researched medicinal herbs. Scientific research in the 20th century focused on hypericum’s capacity to combat depression, based on its positive influence on neurotransmitters4, chemical substances which when not in balance can produce alterations in depressive states and other similar ailments. Other benefits of the hypericum plant include:

1.   For emotional balance and healthy sleep

2.   For irritability during the menstrual cycle10

The Department of Complementary Medicine at Exeter University carried out a study on a group of women to determine whether hypericum could relieve symptoms of premenstrual syndrome (PMS). The study was carried out on a group of nineteen physically and mentally healthy women not taking other treatments for PMS. They were given hypericum tablets for two complete menstrual cycles 9.

This study found that the improvement in overall PMS scores between the baseline and the end of the trial was 51%, with over two-thirds of the sample demonstrating at least a 50% decrease in symptom severity 9. The positive results of studies in this area indicate that hypericum contributes to good nervous system balance during the menstrual cycle 10.

Hypericin is one of the most prominent active principles of hypericum, together with hyperforin and anthraquinone. For this reason, hypericum is used to aid healthy, easy breathing and to soothe the throat 11.

4.   To restore the body’s functions

The restorative effects for maintaining the body’s functions include its ability to strengthen the immune system, improve cardiovascular system health, tone the body, stimulate mental effort and capacity and improve the body’s ability to adapt in extreme and stressful situations12. Besides being a restorative product, it is recommended for anyone wanting to suppress addiction, including tobacco addiction12.

How to take Anastore’s hypericum