Our saffron, an exceptional product 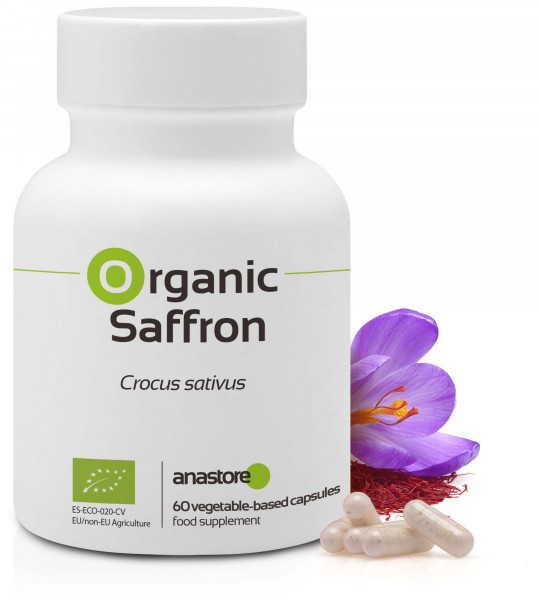 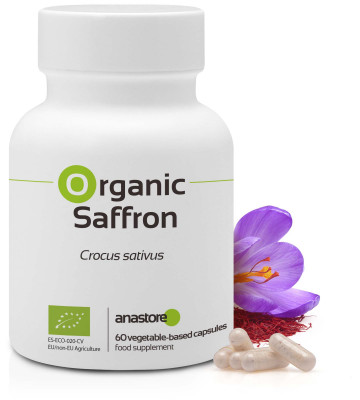 Saffron, poetically called “red gold”, is the world’s most expensive spice.
Prized as a colouring, flavouring and medicinal agent, this powerful spice is worthy of the careful cultivation it demands.
Due to its crocin and safranal content, saffron has anti-depressant, anti-stress and anxiolytic properties.

Our saffron is exceptional, because we respect nature and ancestral customs ans it is certified by the Organic Agriculture Committee of Aragon (CAAE).
Our teams have carefully selected a single site of cultivation in the province of Teruel (Spain).
We carefully monitor all stages of production.
Unlike other extracts on the market, we have chosen saffron strands as they contain higher concentrations of active principles. For each batch of saffron, an external laboratory analyses crocin content using HPLC, guaranteeing its quality.

Saffron is a spice obtained from drying Crocus sativus L. flower stigma. This bulbous plant belongs to the Iridaceae family, grows up to 30 cm high and reproduces via corms. It comes from the Eastern Mediterranean, although its exact point of origin is not clear, and is now grown all over the Mediterranean1. It is characterised for its large, bright purple or violet-veined flowers (known as "saffron rose"), divided into three pungent stigma. It is a very popular spice that is used as a colouring and flavouring for foods. 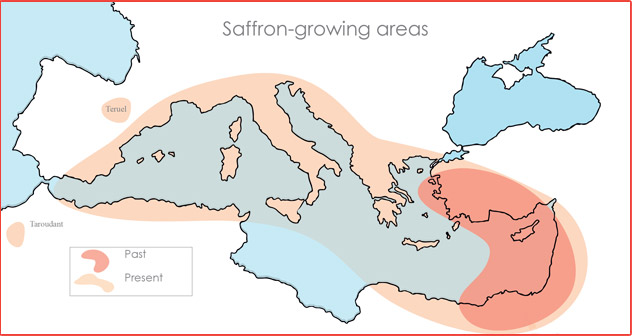 Saffron stigma are mainly composed of carotenoids and heterosides and especially crocin (crocetin esther) that make the plant a powerful colouring agent. It also contains other carotenoids like alpha and beta-carotene, zeaxanthin and lycopene.

Safranal is obtained from bitter-flavoured picrocrocin when drying the spice and is the main compound of saffron oil, giving it its characteristic aroma2.

Our saffron, foucsing on tradition

Saffron has been grown in the province of Teruel (Spain) since the Middle Ages and is closely linked to this region's culture and tradition. It is mostly grown in the Region of Jiloca where it has the deepest cultural and socioeconomic tradition, as it was the main agricultural income for many families in this region of Teruel. However, saffron grown in Teruel started to experience a decline at the end of the last century until it currently became almost non-existent, so its cultivation is once again being encouraged. 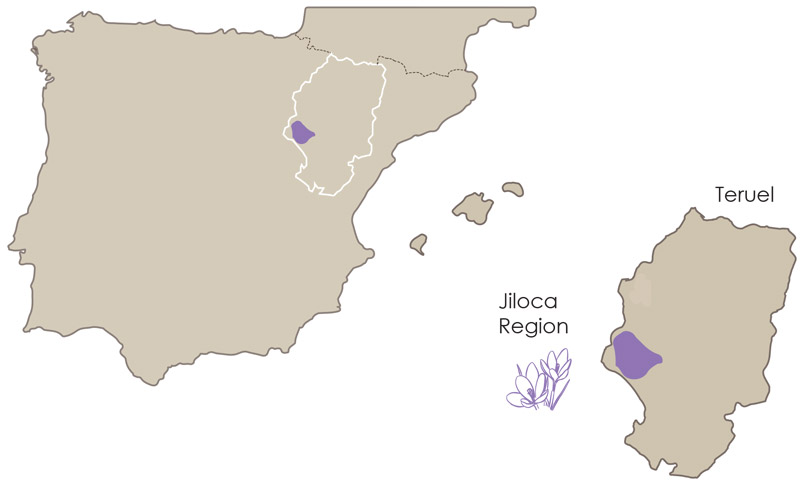 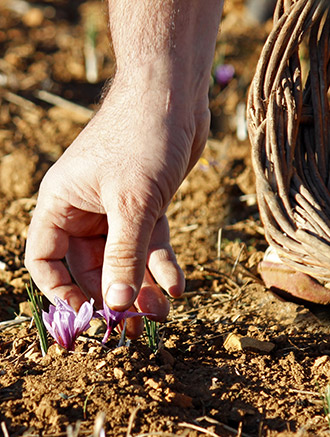 At ANASTORE, we focus on maintaining traditions and always offer top quality products.
Our organic saffron therefore comes from the village of Blancas (Jiloca Region) to help encourage the cultivation of saffron in this area, where traditional methods are used to harvest this popular spice and where we can monitor the harvesting and unblading process, both performed manually.

Saffron is harvested in October-November in the early hours of the morning when the saffron flower blooms to prevent it from withering and its stigma from losing their aroma and colour.

Stigma are separated manually in a process called unblading or pruning. Pruning is a very delicate process and takes place around a long table where the three filaments of the rest of the flower are carefully separated. Ideally, the aim is to obtain three filaments attached to their styles but with the least possible yellow part of them.

Once separated, stigma are dried. This process may be performed in different ways: the traditional roasting method entails placing the saffron on a fine metal or silk sieve attached to a sheet of iron positioned over a butane gas flame where it is moved around gently for one hour.

It can also be dried outside or in a kiln3. It is a very delicate process and care must be taken to prevent the product from deteriorating.

Our saffron complies with the requirements of standard UNE-ISO 3632-2:2011 and is certified by the Committee of Organic Agriculture in the region of Aragon (CAAE). 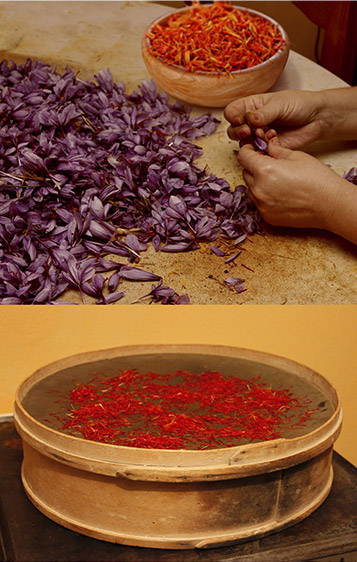 Known as "red gold", saffron has a high market price as 100,000-300,000 saffron flowers are required to obtain one kilo and the harvesting of the flower and separation of stigma are performed manually.
Ancient Mesopotamic civilizations already used this precious spice as a condiment and clothing dye as well as in religious rituals. The colour of the saffron has been considered a symbol of light, spirituality and wisdom for many years4.
Saffron is very closely linked to religion and spirituality and Jews and Egyptians in the ritual of ablution. It was also used by Ancient Egyptians as a colouring for the shrouds of mummies4-5.
Due to its powerful colour and aroma, it was also used in cosmetics: Cleopatra used it for herbal treatments and to paint her lips, nails and hair. Romans used this spice in perfumes and many celebrations: the streets of Rome were sprinkled with saffron when Nero entered the city4.

Saffron probably started to be grown in Spain by the Muslims during the Middle Ages. Its name comes from the word "zahafarm", which, in turn, comes from the Persian word "safra" or yellow. Initially, saffron was sold mainly in Valencia to farmers from the region of Aragon and inland Valencia5. Spanish saffron now comes mainly from Castilla la Mancha and Teruel. 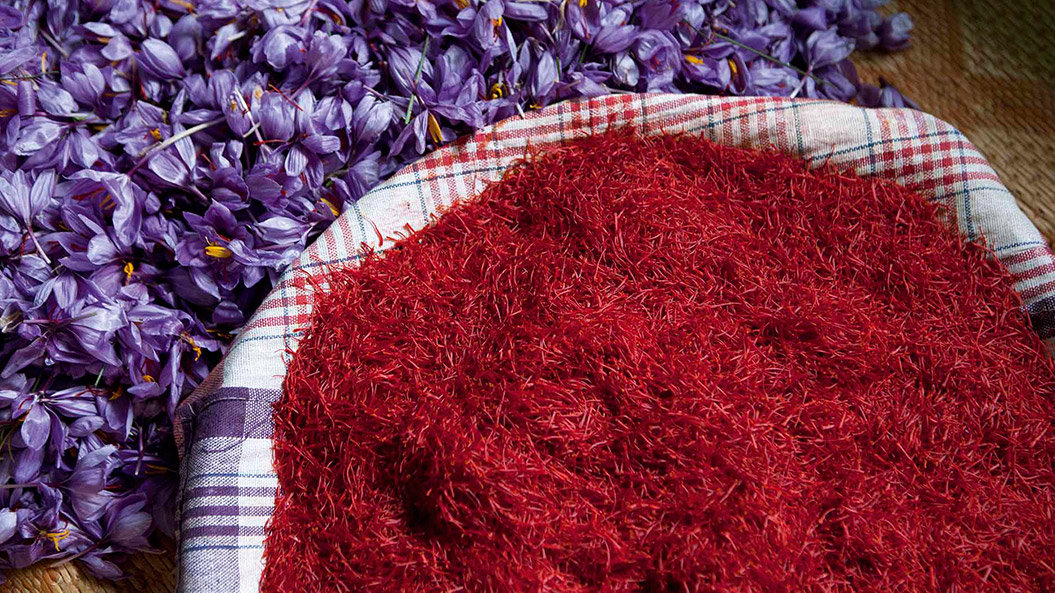 In acient Persia, saffron was used for sore throats, menstrual disorders and inflammation6. In India, saffron was used for asthma, arthritis and colds and was also used as an aphrodisiac and adaptogen7-8. Saffron extract was currently found to have antioxidant, anti-inflammatory, anti-convulsion and anti-depressive properties as well as to improve one's memory and learning capacity.

Saffron's anti-depressive properties were demonstrated in different scientific works9 and its effect was compared to that of other anti-depressives6, 10.
Saffron petal extract also provided positive results in case of depression11.

With regard to the effect of saffron, safranal and crocin can inhibit reuptake of dopamine, norepinephrine and serotonin6. This means that the longer serotonin remains in the brain, the more positive effects are stimulated, which helps to fight depression10. 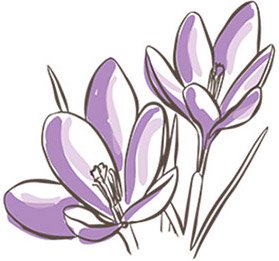 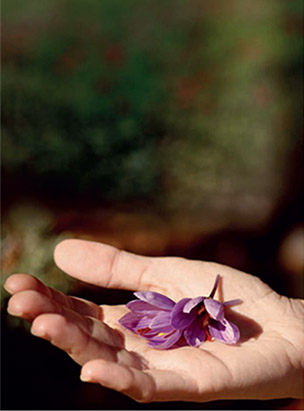 Crocin, picrocrocin, crocetin and safranal have antioxidant properties and in Indian it was used in case of cognitive dysfunctions. Therefore, it was found to improve one's memory and learning capacity as the antioxidant effect of saffron helps to protect nerves against oxidative damage: saffron extract can eliminate free radicals, especially super oxide anions12.

Other effects of saffron

Saffron is also traditionally used for its aphrodisiac properties and in case of erectile dysfunction. A pilot study indicated improvement of the sexual function by increasing the number and duration of erections in 20 patients consuming saffron for 10 days13.

Saffron is also used to relief premenstrual symptoms and, topically, for gingivitis and toothache due to its analgesic effect. On an experimental level, it has also been found to have a hypolipidemic, hepatoprotective and tissue oxigenation effect2. 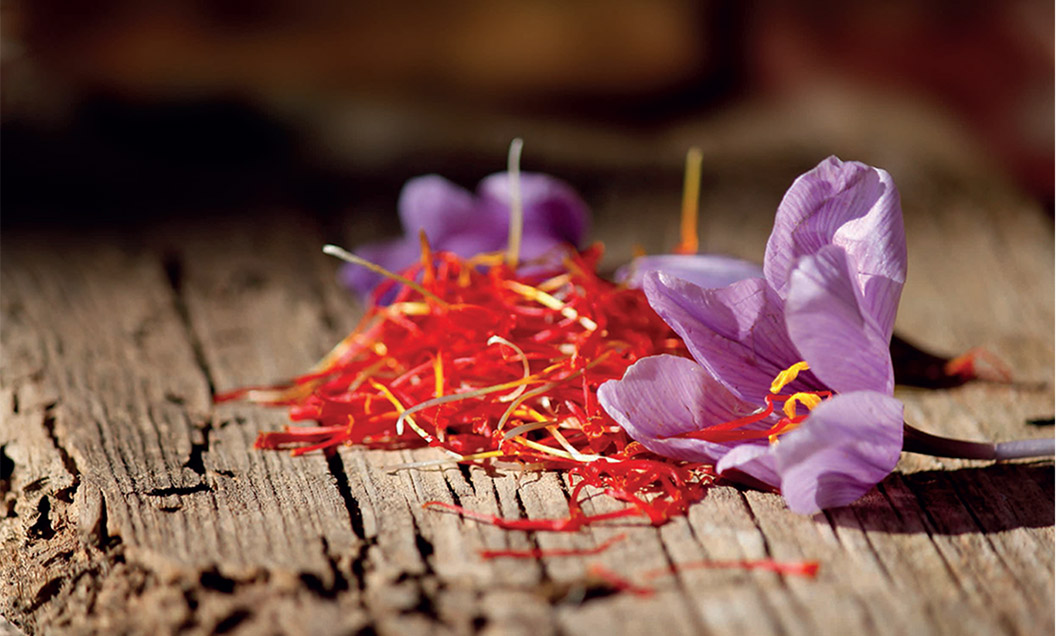 Do not use in case of pregnancy and lactation. Consult your doctor or pharmacist if simultaneously undergoing treatment for depression. Do not exceed the recommended daily dose.

A warming and comforting spice